"You felt you were in safe hands with Margaret" 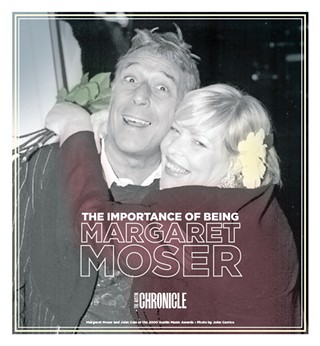 A very good friend of ours, Chesley Millikin, who was from Dublin but moved to Austin and worked with Stevie Ray Vaughan and the Fabulous Thunderbirds, brought us to Texas in the late Seventies. The minute I spoke to Chesley, he recommended Margaret, who was a close friend of his. We were lucky to work with her.

She did the publicity for our tour, which was the Chieftains' first tour, where we just went to Texas for two weeks and toured around all the various towns and cities. I remember visiting with the mayor of Austin at the time, and she really gave us the freedom of the city. All that was due to Margaret.

Anytime after a concert, we would visit all these great establishments. In 1979, we played Willie Nelson's Opry House, and Margaret and Chesley played me a tune called "Cotton-Eyed Joe." I said, "That's an Irish reel," so we worked it out and put the original reel, "The Mountain Top," into it and did it the next night. When we got back to Dublin, we recorded it and put it out as a big single here.

To me, Margaret was gigantic, as a person and the work she was able to do, and even just her influence as a person. She was the right person, and I wish I had a Margaret around now. You felt you were in safe hands with Margaret.