Margaret and my dad [Champ Hood] knew each other, and since I was going to my dad's shows since I was 5, we probably met then. She watched me grow up, start playing, then do my own thing. She's always treated me like we were best friends. She'd see me and say, "Warren, it's so good to see you. You're doing so well!"

When I was about 20, I released my first album, Warren Hood, and Margaret gave me my first good review in the Chronicle. Today, I have only two quotes on my website. One is from Lyle Lovett and that one from Margaret.

A few years ago, she did a story on Emily Gimble and me, and we sat around drinking coffee at Threadgill's, telling stories. For the first 30 minutes, we just talked about the weather, traffic, the news. It didn't feel like an interview; I don't remember a notepad or a tape recorder. It was more like a conversation, naturally changing subjects. She'd tell a story about Champ, then I'd tell one, she'd tell one about Johnny Gimble, which led Emily to tell one.

It was all very effortless.

People say Austin is the live music capital of the world, and it is – for the great music, but also because of people like Margaret telling the stories. Even as she's grown older, she's done a real good job of keeping the old Austin music alive while being true to young artists. She never lost touch with what's happening now. She's way hipper than I am. She's the coolest, hippest lady.

A version of this article appeared in print on June 30, 2017 with the headline: Warren Hood 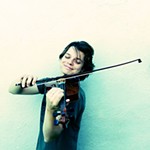