I first saw her name in the paper. When I started learning to play music, I always read her column. I was drawn to the way she wrote and she was interested in the things I was interested in: roots and blues music, younger artists. She was the window into this world I first became aware of as a 13-year-old.

She wanted to do an interview with me when I was 16 or 17 [see "Blue Monday," Dec. 29, 2000]. At that age, for the first several years I played, I was around all these really great, way more experienced musicians. When she wanted to interview me, I couldn't understand why. I was really anxious. Here was this name I'd seen in the paper week after week, and she wanted to talk to me?

The more we spoke, the more comfortable I got. The way she spoke to me, it made it effortless. There may have been smaller ones, but this was one of the first interviews I'd done. It was a big deal because it was the Chronicle, and a bigger deal because it was Margaret.

She could sense I was uneasy. She naturally geared her questions toward some of the things I was already talking about. She was able to bring the conversation back around to what she wanted to discuss by talking about other things. I realized that's what she does: She makes people feel better about themselves. She makes them feel relevant, and confident in what they do.

After I got off the phone with her, I remember feeling a little better about myself. "Wow, I got through this interview with Margaret Moser." I've talked to so many people who've said the same thing – that she'd champion all these musicians, all these artists who, on their own, wouldn't have necessarily had some of the opportunities that she helped present for them.

A version of this article appeared in print on June 30, 2017 with the headline: Eve Monsees

Eve Monsees & the Exiles
You Know She Did (Record Review) 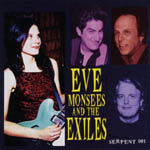