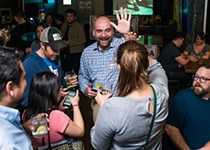 Requirements will stay in place for now

Everybody on the bus

Life on the dais, for quite a while

Putting Brian Manley to the Test

Civic discourse on the skids

Get cool drinks and tasty snacks in one place

The Spice Is Right With These Indian Tacos

A mix of cultures in a Tex-Mex shell A New World Opens Up for Austin's Soul Priestess Mélat

Move Me II: The Present

In honor of Star Wars Day, Austin’s creatives talk about how the Force changed their lives

Workers of the World, United in Time

UT Lecturer Anne Lewis on her new doc, A Strike and an Uprising (in Texas)

David Tennant plays Hannibal Lecter, which is less fun than it sounds.

Zines on the Central Library Shelves

The city works to recognize and grow zine culture in Austin

Snapshot: Levitation All Lit Up

Whatever you want to call this play/scavenger hunt/immersive live roleplay, it’s a one-of-a-kind, wonderful theatrical experience

In Sheila Cowley’s new play, questions of identity arise for three people during the creation of a play

Chiles explores the ever-changing nature of light, time, and life through transcendant prints of light’s little dance through flora
columns

Austin pups celebrate the Year of the Dog

On the ominous meaning of "kid-friendly"