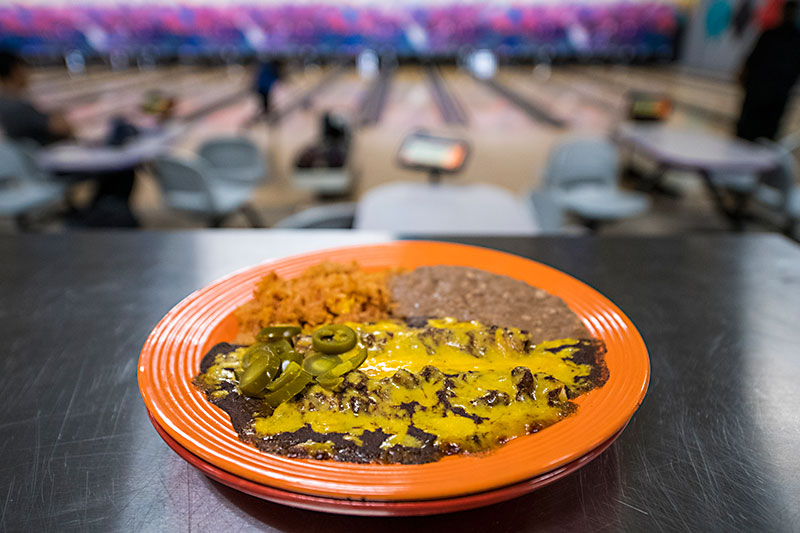 Waiting in line at a dingy bowling alley concession stand for reheated Red Baron pizza may hold its nostalgic value, but rarely was the food ever so tasty that you could forget you were wearing someone else's sweaty shoes. For Brandon Rascoe, co-owner and chef of Lebowski's Grill (with locations at Highland Lanes and Westgate Lanes), it's his mission to prove otherwise.

"We were trying the break down the stigma that [bowling alley food] was all just premade food put together. We wanted to put real food back into the bowling alley," says Rascoe of his goal when opening Lebowski's 10 years ago.

And break down they did. Rascoe, who graduated from culinary school, emphasizes he and co-owner Gabriel King strive to make everything they can in-house. Their menu is expansive, featuring everything from loaded burgers like the Buffalo Dude (the pair met while league bowling at Highland Lanes, after all) to corn dogs and Philly cheesesteaks. No "cheeze" cans or freezer fries in sight.

Like Rascoe, Dart Bowl Cafe manager Peggy Zamarripa aims for fresh-never-frozen ingredients and homestyle cooking. Dart Bowl Cafe, tucked inside local institution Dart Bowl, is famous for their enchiladas, which Zamarripa has been dippin' and rollin' up with cheese and smotherin' with chili ever since owner Milton "Butch" Martinets' father gave her his recipe not long after she started working there in the Seventies.

"It's homemade chili – I make 15 pounds a day," says Zamarripa. "You know, I don't even measure, I've been making it for so long, and I'm the only one that makes it." When asked what's in the chili, Zamarripa exclaims, laughing, "What's in the chili? Lots of love, girl. Lots of love." However, she's quick to add that her chili is only meat, no beans – this is Texas. It's a legacy you can taste in their homemade rolls and yeast bread, which complement their chicken-fried steak (hand-breaded and available on the huge breakfast menu as well).

Though Lebowski's has only been open about one-fifth of the time Dart Bowl Cafe has, their consistent quality has elevated their burgers to second place on Yelp (following Austin-based chain Hopdoddy), and their crispy tots hold the coveted first place. "Who knew bowling alley food could be so good?" and "I know it's in a bowling alley, but ..." are common refrains in their online reviews, which Rascoe says generates a significant amount of new customers. Rather than take offense at these comments, he finds motivation. "That right there is probably what gets us up everyday," he says. "We have people that have that stigma about bowling alley food, but they see these reviews and come in and we win them over. You know, the review got them in the door, but the food has got to win them over."

With Dart Bowl Cafe and Lebowski's locations in bowling alleys, one may think their customer base is largely Walter Sobchak types or tween birthday parties. Surprisingly, that's far from reality. Both Rascoe and Zamarripa say a majority of their business comes from folks who come in only to eat, mainly during the weekday lunchtime rush. For Zamarripa, it's especially important to make food that's kept families coming in every generation. "I'll have somebody come in and say, 'Oh, my dad used to – or my grandfather used to – come in here and he always talked about it.' I just hope the generation keeps going on."

Amidst a culinary scene with its mix of gutterballs and strikes, Dart Bowl Cafe and Lebowski's Grill more than abide, they endure. Sometimes you just want a dang good burger or enchiladas and in our city that means stepping into a bowling alley. No shoe rentals required.

A version of this article appeared in print on May 4, 2018 with the headline: Austin’s Culinary Kingpins