In Sheila Cowley’s new play, questions of identity arise for three people during the creation of a play 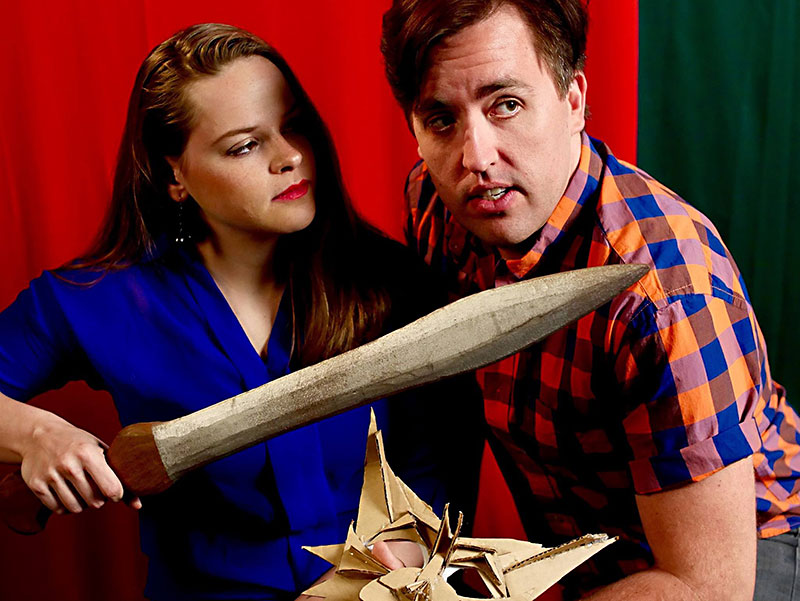 "Who are you?" – a dangerous question to ask an actor, someone who routinely traffics in alternate identities. The reply you get may come from the person who exists offstage, one of the numerous characters that actor has embodied onstage, or some hybrid persona made from one bleeding into the other. You may not be sure who it is. Even more unsettling, the actor may not be sure either.

That's one of the uncertainties threaded throughout Trio, a new play by Sheila Cowley receiving its world premiere from Filigree Theatre, itself a new company. Center stage are Leslie and Tim, who are holed up in her father's garage working desperately to create a new play for kids that they can perform at a major theatre festival the next day. But Leslie is distracted by her mother's hospitalization, and the two can never get far in the scene they're working on without Leslie's cell going off – a constant reminder this may be the last act of her mother's life. "Who are you?" asks Tim whenever their work resumes, and it's intended as a prompt to get Leslie focused on the play again ("I'm the hero," she insists, gripping a wooden sword), but the frequency with which the question is repeated adds a weight to it that makes it land more heavily than a rehearsal process tool. Tim's habit of adopting different names and accents makes him a slippery figure, identity-wise, and the presence of Fletcher, an old friend that Tim has recruited to be their stagehand for the festival performance, complicates the question further. Who are you? Actor? Engineer? Friend? Lover? Daughter? Orphan?

The queries swirl around this trio in a space suggesting naturalistic drama – Chris Conard's set is a garage any suburbanite born after World War II will recognize: shelves, storage tubs, tools, the odd keepsake that no longer lives in the house yet hasn't been thrown away – but the first figures to enter it are a threesome in extravagant masks and outfits who silently and invisibly observe the other trio and interact with them as theatrical spirits, transforming ordinary objects into stage props for the rehearsal and altering the lights with a wave of their hands. They signal us that this is some mystical space, and as Trio goes on, Cowley seems less interested in delivering a well-made play than exploring self and change along mythic lines. The tale's mechanics remain fuzzy – like, what the deal is with this festival Leslie and Tim are prepping for and why they'd risk a major career opportunity on a new, untried show rather than one they've done before – so the narrative never gains traction. Instead, scenes follow a fuguelike pattern, with Leslie and Tim starting to rehearse ("Who are you?" "I'm the hero"), tension building between her hero and his monster, Leslie's phone ringing, Leslie exiting anxiously, Tim and Fletcher conversing alone, and Leslie returning, at which point the action repeats, with variations. Phrases crop up again and again like musical motifs – "I need a monster," "That's too scary," and "Does it hurt?" "Just everywhere," among them – and their metaphoric import as Leslie deals with a genuine life-and-death drama keeps us keenly aware of the hurt, fear, and apprehension facing these characters.

The emotions are honestly conveyed by Chelsea Beth as Leslie, Ben Gipson as Tim, and Ethan Cannon as Fletcher, as guided by Filigree Artistic Director Elizabeth V. Newman. However, some of the frustration that Leslie expresses as she bounces between concern for her mother and the stalled play may spill off the stage into the audience. The frequent interruptions and lack of forward momentum can make it difficult to stay invested in the characters and their relationships – or even to see where those relationships come from. The connections among the human trio tend to flicker like the lights in the mysterious garage. Which means that when the lights go down for the last time in Trio, we may still be looking at the characters and wondering, "Who are you?" 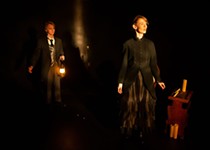 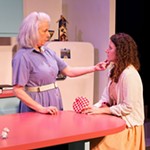