Requirements will stay in place for now 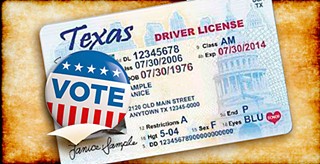 According to the conservative U.S. 5th Circuit Court of Appeals, Texas' voter ID law – deemed intentionally discriminatory by a lower federal court – is perfectly fine as currently structured. In a victory for state officials hoping to further marginalize the Democratic vote, a three-judge panel last Friday ruled that the changes legislators made in 2017 to fix the controversial 2011 law were successful.

The updated law forces voters without any of the seven approved forms of ID to sign an affidavit; provide another ID via documents like a utility bill, bank statement, or paycheck; and promise that a "reasonable impediment" prevented them from obtaining legal ID. If they are caught lying about that impediment, they could face jail time, which you can imagine creates a possible chilling effect on voters. In August, Judge Nelva Gonzales Ramos said the revised law fell short of actually remedying the problem and described it as a "poll tax" on indigent and minority voters. The state appealed, sending it to the 5th Circuit. Judge Edith Jones wrote the majority opinion, praising the changes and downplaying or brushing away racially motivated intent. The district court "overlooked SB 5's improvements for disadvantaged minority voters and neither sought evidence on nor made any finding that the Texas legislature in 2017 intentionally discriminated when enacting SB 5," she wrote. Her opinion comes as no surprise as Jones previously wrote a scathing dissent when her 5th Circuit colleagues found the original law to be in violation of the Voting Rights Act in 2016.

The 2-1 decision in Veasey v. Abbott claimed one lively dissent, from Obama appointee James Graves Jr., who had some colorful words for the law: "A hog in a silk waistcoat is still a hog." Graves, who's black, called the law an "unconstitutional disenfranchisement of duly qualified electors" and said "SB 5 is merely its adorned alter ego."

Civil rights groups suing the state can still appeal the ruling and request a case review, or appeal to the U.S. Supreme Court, which is currently mulling over Texas' redistricting maps – yet another tangled and discriminatory Texas policy.

Protest Votes Under Scrutiny
Over 16,400 Texans signed an affidavit in order to vote