Get cool drinks and tasty snacks in one place 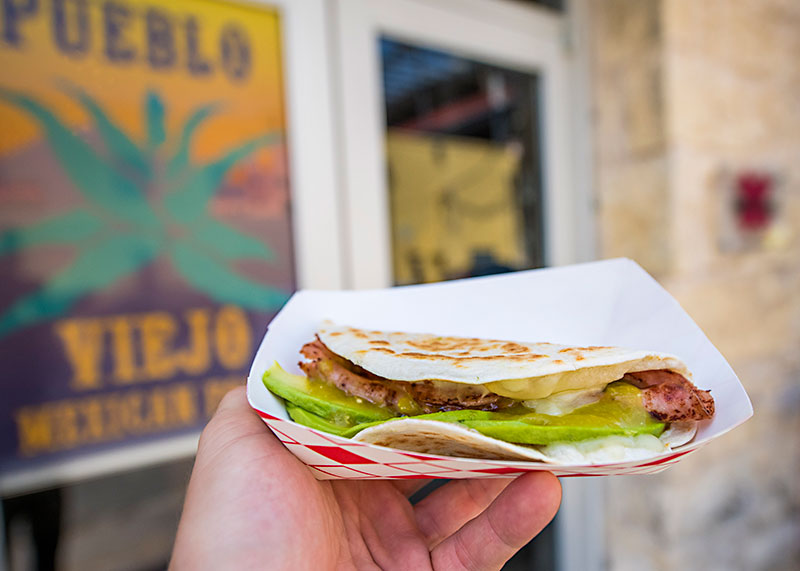 Austin's got a spectacular snacking scene, but we're better known for our music. Fortunately for us all, the best live music often comes with dinner on the side. Whether it's a post-show stop at a food trailer park, a between-shows break at a gas station taco truck, or drinks and dinner at a bar where musicians use their drink tickets for paninis, you've got to fuel that audience somehow – how else are we going to gather the courage to dance? Because we're the live music capital of the world (suck it, Nashville), here are some of our favorite spots to chow down while we get down.

2039 Airport, www.skylarkaustin.com
Full disclosure: Skylark was the inspiration for this list. With their affordable well whiskey, rotating slate of wholesomely talented dad bands, and pizza slinging relationship with the temporarily closed Ladybird's Austin Kitchen (sigh), Skylark has always been our ideal of an Austin music venue: no-nonsense, high-quality, and just a little divey. They've since moved on to weekend barbecue, but the tunes and whiskey remain, and hey, there are worse things to pair with your Lone Star than brisket and hot links, right?

502 Brushy, www.puebloviejoaustin.com
Sadly, the tacos at Pueblo Viejo's North Door outpost are a little too substantial to eat one-handed while shimmying at a live show or, better yet, one of their fantastic monthly cumbia nights, but you can always take a break to refuel with a breakfast taco or two. Pro tip: While the saucier tacos are delicious (especially the Tico – those black beans are out of this world), the Quesadilla Sincronizada is much easier to consume without dripping on your dancing shoes.

1906 E. 12th, www.fb.com/king-bee-1462071510718466
You knew there'd be at least one pizza venue, right? No food is better bar food than pizza. At King Bee it's tavern style, thin-crusted and buttery, cut into squares that give you perfect little right angles of bread to eat. Their classic cheese is probably the gooiest, ooziest, meltiest, cheesiest pie in town, and all of these pizzas are enormous. Try the new Hawaii 512, which dresses up a controversial classic with pickled jalapeños, spicy brisket, and red chili pecans. Paired with some stand-up comedy or a low-key dance night and a couple of alcoholic slushies, a night out at King Bee is a grownup version of the best pizza party you ever had.

1413 Webberville Rd., www.saharalounge.com/africa-night
So, technically, it's only once(ish) a month, but Africa Night at the Sahara Lounge still deserves an honorable mention for being one of the best and most uniquely Austin ways to spend a Saturday. Eight bucks at the door, and you get a buffet of delicious homemade food (those spicy meatballs!) and a night of judgment-free boogying to infectious global beats provided by their house band Zoumountchi, on an intergenerational dance floor where nobody cares about your garlic breath. You really can't ask for more than that.

Editor's Note: This piece originally described Toaster as Stay Gold's on-site trailer; we have since updated the story to include Toaster's new address and the new food truck at Stay Gold.

A version of this article appeared in print on May 4, 2018 with the headline: Eat, Dance, Stay Awhile