In honor of Star Wars Day, Austin’s creatives talk about how the Force changed their lives 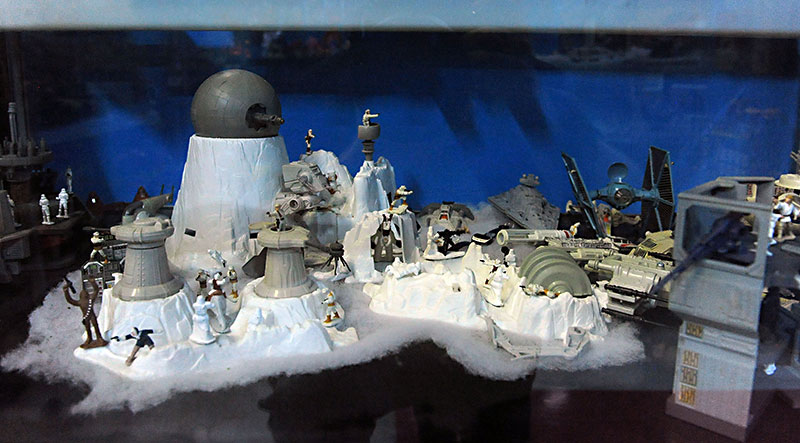 From a galaxy far, far away to the world's imagination, tales of the Jedi and the Sith have reshaped modern culture. As the world marks Star Wars Day on May the Fourth, we asked Austin's filmmakers, reviewers, writers, and artists about how Wookiees and Ewoks, toy spaceships and re-releases, shaped their childhoods and beyond.

"Being born in 1983, I have a strange relationship with the original trilogy – having seen the original films exclusively on TV broadcasts dubbed to VHS. Even stranger, having seen the films in the now historic window of time when they weren't ubiquitous. They were just story blueprints with which to organize play with my older brother's hand-me-down action figures.

When they were eventually reissued, and made 'special' for theatrical presentation in the mid-Nineties, that was the first time that I experienced excitement around Star Wars – I was too young to see the marketing onslaught or realize how contagious that form of advertising truly had become. And it baptized me into a full-blown fan [for the release of] The Phantom Menace in 1999. I remember buying tickets in advance (including tickets for my high school teachers, who were also excited at the time).

I remember watching the trailer over and over again on a terrible Quicktime MOV file on my dial-up internet. I remember buying toys before I had seen the movie. But the thing I most vividly remember, was enjoying myself along the whole ride. Maybe I didn't enjoy the film itself, but it truly was the start of 'event' cinema for me. It's something I participate in still to this day. It continued with the Star Wars prequels – into the Lord of the Rings trilogy, into the Harry Potter franchise, and now, again, annually with new Star Wars films. I've grown older and a little more cynical, but regardless of the quality of the films, the cultural impact – the unification of pop culture around a single story – is a fascinating experience and one I attribute entirely to Star Wars."

– Mo Shafeek is the label manager for Mondo Records.

"The cantina scene has stuck with me forever. It's the first scene that pops into my head anytime I think of Star Wars. Every time I see it I notice another fun creature and am inspired. So many cool designs. There are puppets and prosthetics aplenty and it's a magical wonderland of delightful characters playing instruments and just hanging around. I would have loved to be in the room with those FX guys coming up with designs. Also, I still laugh every time the arm gets cut off and everyone just glances over, shrugs and then just goes on with life."

– Meredith Johns is an Emmy-nominated special effects artist, and co-founder of Hawgfly Productions. Her work has been seen in films as diverse as Machete and True Grit.

"An odd thing always stuck with me from my back-to-back screenings of Star Wars in 1977 when I was 11 years old. A teenage couple sat in front of me, and it was clear that they, like the rest of the packed house, were very into the movie. Out of nowhere the guy leans into his date's ear, points at C-3PO on the screen and confidently says to her, 'He's a homosexual.' Ugh! Even as LGBTQ-hostile as the Seventies were, I was appalled that this guy felt compelled to assert his toxic masculinity onto an innocent android. The WTF-ness of that moment nested in a crevasse of my brain and still replays (hologram Leia-like) every time I watch Star Wars. Also, four decades of getting to know people from all walks of life and watching C-3PO in 10+ movies later, I think, 'Ya know, maybe that guy was onto something.'"

"I'm not sure what the kids were up to at recess before, but I think Carrie Fisher gouged a hole in the glass ceiling of gender playground dynamics in my day. I was lucky enough to inherit the role of Princess Leia much of the time and though I certainly found myself being rescued, I led the charge just as often. It was nice while it lasted. When Return of the Jedi came out, we girls all wanted to be the white puffball Ewok princess. Not quite the same."

– Karen Skloss is an editor, writer, and director, including SXSW 2017 Midnighter The Honor Farm.

"It's no exaggeration to say that Star Wars is why I wanted to write about film. Growing up in the windy, rainy north of England, I spent the last half of 1977 reading about this amazing new film that had opened in the U.S., and we had to wait until early 1978 for it to sneak over the Atlantic. When I finally saw it, my young brain was warped for life, but it was the very first magazine, Star Wars: Official Collectors Edition (cover price 95 pence), that became its own obsession. Suddenly I was reading about the production process and characterization and influences and subtext, that film was something to be examined and explored, not just watched. The die was cast."

– Richard Whittaker is the Screens editor for The Austin Chronicle.

"I am forever grateful to Stars Wars: Episode I - The Phantom Menace. My friends and I camped for three days outside the Regal Cinema in North Austin for tickets to the first Episode I screening. Those three days were a brilliant, sleepless orgy of geekdom. We argued Jedi lore, pondered Boba Fett origin theories, and fantasized on the feast had Papa Lucas prepared for us. What joys and intrigues? What delights as we return to a Universe we had presumed complete? In that long line, we bonded as only pilgrims can. Suffering together, striving together, hoping together. We shared the welcome burden of the wait, we shared the faith that our struggles would be rewarded, we shared a holy and gleeful anticipation.

Then we saw the film.

But still, I am grateful for Episode I. Not for the film (which is really, really not good), but for the line, for the shared thrill of fandom, for the opportunity to suffer for something we love. Sure, my faith was eventually shattered, but for a moment, when the lights first went down, when the blue-green glowing words read 'A long time ago in a galaxy far, far away ...' In that instant all our eager ecstasy met its desire and, for a moment, we believed."

– Owen Egerton is an author and filmmaker His next film, Blood Fest, will be released later this year.

"Probably my fondest Star Wars memory was from a birthday party I went to when I was 6 years old. They were doing a 1997 theatrical run of the original trilogy, so kids were going nuts for Star Wars again. One of my friends had a Jedi-themed birthday party where they handed out lightsabers made from PVC pipe, neon paint, and black electrical tape. Imagine 20 first-graders in a massive backyard war beating each other relentlessly with hard, dangerous sticks of plastic. Those were good times."

– Blaine Gibson is a writer, actor, and director at Rooster Teeth, and is the online studio's biggest Star Wars fan.

"I had the working-class inflatable Star Wars lightsaber from Palitoy, which was essentially a torch with an inflatable tube that could be doubled as a life preserver floatie. It was a pain in the arse to blow up and didn't last long in heated battles in the school playground. I always lost to the plastic saber kids and got punctures pretty quick, alas ending up with a flaccid saber but a fully functional torch."

– Sandy Carson is a photographer, and author of live music photo history We Were There.

Star Wars was always my first collection. I can’t remember if my love for it came from seeing the movies or from playing with the toys, but I have lots more memories of the toys then the movies. My mom would always bring me home random figures from garage sales, grandpa took me hunting for the few figures still left in the stores in 1986, and my brother and I would wack each other with hard '80s plastic lightsabers till they were taken away. I think in short what I’m getting at is that Star Wars to me wasn’t about the movies or the plastic, but rather about the time I spent with family with Star Wars acting as a catalyst. Those memories and more are what I see when I look at my collection and that’s why I love Star Wars toys.

– Caleb Zammit is the founder of the Austin Toy Museum.

"One of my earliest memories is visiting the hospital where my baby sister Gia had just been born. We went directly from there to Toys 'R' Us (R.I.P.!) where I was purchased the Death Star playset. This was, at the time, the most important status symbol among my friends, and I was given it as a 'good big brother' present (i.e., a bribe). It must have worked because my sister and I hardly fought growing up. She did, however, chew up that green plastic trash compactor monster thingy which was more of a dog toy than an action figure. Years later, when Lucas decided to release the special-edition version of the original trilogy, I remember taking Gia. It was her first time seeing the films in the theatre and, as any good older sibling would do, I made sure she knew that Han shot first."

– Bears Fonté is the founder and director of science fiction film festival Other Worlds Austin.