With his longtime collaborator Roland Emmerich, Dean Devlin was the king of crazy high-concept mega-blockbuster: Credit/blame him for Stargate and Independence Day and the 1998 U.S. remake of Godzilla. They were big and clumsy, but at least they were fun, which he forgot when he tried to recalculate the world-wrecking equation with the jaw-slackingly awful Geostorm.

Lesson seemingly learned with Bad Samaritan, which is not (unfortunately) an off-brand Bad Santa spin-off. Instead, it's an opportunity for former Doctor Who David Tennant to play a different kind of inhuman. After hunting monsters in Broadchurch, now he's having fun becoming one: first Kilgrave in Jessica Jones, now icy lunatic millionaire Cale Erendreich. Well, at least he’s having fun.

Formally known as No Good Deed (a much more apt title for the script by Apt Pupil adapter Brandon Boyce), Bad Samaritan's protagonists are a pair of street dogs, Sean (Sheehan) and Derek (Olivero), who run the old valet scam – while a family is at the restaurant, they drive to their home, use their keys to get in, and rob them. Which is fine, until they decided to boost Erendreich, who has a deep, dark secret tied up in his house. This is a gut-check moment for Sean, who bolts, but then regrets his moral failing, and tries to get the cops involved, which is an even worse plan than trying to steal the credit cards of a murderous genius.

Working from a script that lacks the visceral ingenuity of a Don't Breathe, Devlin's Nineties crowd-pleasing instincts end up holding him back. Bad Samaritan creates a resolutely nasty scenario, and Tennant has no problem at all digging deep into the horrors. It's like he turned up for a real hardcore nightmare, like something the gleeful goredogs of Unearthed Films would dig up from the underground. Instead, it's straight out of the glut of post-Silence of the Lambs potboilers, like The Bone Collector, only even marginally redeemed by Tennant surpassing the discount-store Hannibal Lecter tag so easily applied to that subgenre’s antagonists. Boyce even tried to provide him with a Clarice Starling/Alex Cross (remember Kiss the Girls? Anyone? No?) in a dogged FBI agent (Heggins) who believes Sean when no one else will. However, the script’s hackneyed attempt to give Erendreich a motivation reduces her already wafer-thin role to basically delivering an exposition. An icebound final chase sequence, rather than chilling the bone, slips into silliness, and not even the former Time Lord’s sliver of a grin can save it from slipping and sliding out of your memory. 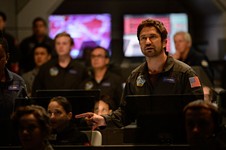