On the ominous meaning of "kid-friendly" My best friend since childhood and I both have preschool-aged children. We usually get together once a month at least to catch up and have lunch or dinner. Believe me, I am not patting myself on the back when I say my children are reasonably well behaved ... I know they can be plenty obnoxious on occasion, but her kids are an absolute nightmare. She lets them run wild every place we go and doesn't seem to be at all concerned about it. We have even had people come up to us and ask if they are her children. I have tried not to let it bother me or be too judgmental, but it really gets on my nerves. Recently, I have begun suggesting that we go to restaurants that are more appropriate for "free-range" children like hers. Seems like a good idea, right? EXCEPT, that I heard from a mutual friend of ours that she now thinks that I have horrible taste in food and that I prefer cheap, noisy restaurants. So now I am really pissed off and trying to decide if I should tell her what a clueless bitch she is. Should I speak my mind or hold my tongue?

Whenever I see the phrase "kid-friendly" in a restaurant's description, I remove it from the list of places I would like to eat. This is not necessarily because I think the food is going to be bad, it's because someone has decided it's a good place to take kids. Inevitably, that means someone like your friend will be there with her kids, expecting the rest of the world to be her unpaid babysitter. I ain't with that.

I get it. I understand that sometimes parents just need a break. I also understand that it's a huge pain in the ass to find a good babysitter, and even if you do, it will probably come at a high cost. It sucks to drop a bunch of money on a babysitter just to go out to Chili's, so you end up at Uchi and before you know it, you could have let your kids trash a room at the Four Seasons. Some parents, when facing such an impossible task, end up taking their kids to places like Dave & Buster's where they try desperately to believe they are relaxing, having a good time, and eating decent food.

Then there are those "it takes a village" types who feel that their inability to practice effective birth control entitles them to the unconditional love and unlimited forbearance of anyone who is blessed with a chance encounter with their offspring. Yeah, I ain't with that. Austin, even the Earth in general, has plenty of people, so if you're gonna make some new ones, you better put a spit shine on them – and I'm not talking about the drool rolling down their chins. I mean letting them know what is acceptable public behavior and keeping them cloistered until you do. And if that means the parents are cloistered too, so be it. The 7 billion people already jockeying for the Earth's resources didn't yank that condom off your dick.

Think of it this way: If a grownass man walked up to you in a filthy, stained shirt with green snot gurgling out of his nose and reached out and touched your food with his dirty, grubby, black-fingernailed hands, you would absolutely lose your shit. You might not actually shiv him with your butter knife, but you would certainly push him violently away, exclaim, "What the fuck, dude?!?!?" and immediately demand that management call the police or at the very least remove him from the restaurant. Why should it be any different for a toddler? Because he's young and he doesn't know any better? How is that my fucking fault? That's like saying that the homeless guy who walked up and put his dick in your soup is "crazy and he doesn't know any better." Cute little bugger.

No, that is absolutely insane. Intolerable. As intolerable as letting a baby in a high chair fling cracker crumbs all over a restaurant and then tipping the waitstaff a few extra dollars because they have to clean it up. Hey! How about you just not put your dick in my soup in the first place? How does that sound?

Anyway, so back to your friend ... why don't you just hand her a copy of this column and tell her how hilarious you think it is? 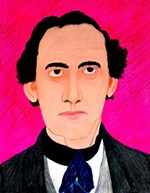 The Luv Doc: A Little Dahoo Dores
We have to make space in our hearts for the paste-eaters like Greg Abbott and Dan Patrick