Turkish writer/director Deniz Gamze Ergüven galloped out of the gate with her debut feature Mustang, a film about five adolescent orphans whose girlhood is about to be snuffed out by forced matrimony. The sensitive yet rebellious story was an oft-mentioned contender for the best foreign film of 2015. Ergüven’s second feature, and her first in English, proves to be a disappointing successor. Although it shares many attributes with Mustang – attention to issues of social repression, strong image-making (cinematographer David Chizallet worked on both films), convincing performances by non-actors, music scores by Warren Ellis (joined for this second outing by his frequent collaborator Nick Cave) – Kings is a confusing and far-fetched story in which good intentions outweigh good storytelling.

Set in Los Angeles during the years 1991-92, Ergüven uses the fomenting events leading to the L.A. riots 26 years ago this week (the death of 15-year-old Latasha Harlins by a Korean storekeeper who erroneously thought she was shoplifting, and the beating of Rodney King by four white police officers, who were subsequently acquitted) as the backdrop for the film. Few sequences are as sharply focused and emotional as its preamble, which re-creates the events leading to the tragic shooting of Harlins. Ergüven and her cameramen edit together archival footage and newly shot material to foster a realistic sense of the chaos and confusion that dominated the mood of that period. The movie also puts forth two romantic subplots that personalize the tenor of the times, but ultimately soften and diminish its harder edges.

Millie (Berry) is a character who has a soft spot for foster children: She has eight. She’s a single parent overseeing a happily blended family, even if their sheer number leads to some household chaos and disorder. Obie (Craig), a neighbor whose window can be seen from hers, often hollers at the brood to quiet down. But, of course, he turns out to be a drunken brute with a heart of gold, and Millie starts having fantasies about Obie, one of the only white people residing in the neighborhood. Eventually, the riots occur and the two are handcuffed together around a streetlight by a hate-fueled cop, and the sequence turns into a misguided meet-cute and practically sunders the import of the rest of the film.

It’s not surprising that Kings slipped into movie theatres with little fanfare. The fact that Berry and Craig keep up their movie-star looks throughout (if a bit dulled-down) also picks away at the film’s innate honesty. Yet even though Kings misses the target, its aim in nailing the perplexity of that period is true. 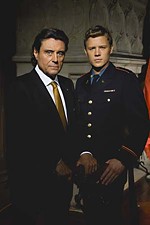