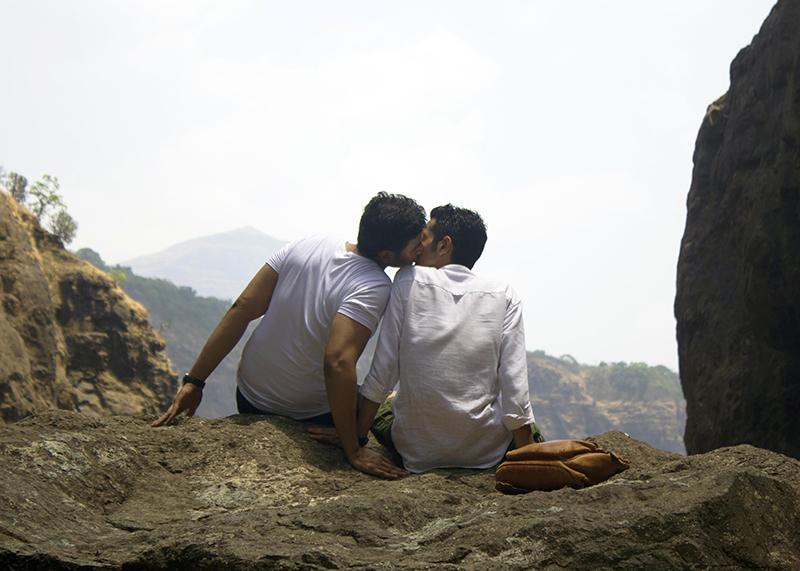 Another romance. Another gay movie. Another oversimplified view of India. Sudhanshu Saria didn't want to make that movie. Loev, Saria's feature-film debut as writer, producer, and director, tells a more subtle tale. Childhood friends, Jai and Sahil, reconnect when Manhattan-based Jai returns to Mumbai for a business-meets-pleasure trip. But, as the weekend unravels, so do the constraints of their relationship.

Pronounced love, Saria said the film's title "identifies the superficial nature of the difference people see when two men kiss or when they see two women together. There is no difference really, it's just two hearts." Love – or perhaps how to love – is what Loev is all about. Currently, being LGB in India is punishable by law (transgender rights are detached from gay rights), but refreshingly, Loev shies away from the coming out and "town lynching" narratives for a less-fetishized story.

"The most political thing about the film is how little it cares for the politics of its place," said Saria. "I honestly just wanted to make a love story. A simple, nuanced, real romance that would give people a window into what gay life is really like, what upper-class Mumbai is really like."

However, possibly because it was Saria's heartbreak that inspired him to write Loev, this is not the kind of romance that leaves the characters – or viewers – skipping off into the sunset. There's a darkness lurking at the edge of the film that has already inspired conversations. "From past screenings, I know the film provokes a lot of discussion on the right and wrong way to behave in love," explained Saria.

Though set and filmed in Mumbai, Loev has not yet been screened in India. Because of the film's taboo subject matter, the Loev team is working hard to build support outside its country of origin so that "it matters by the time it gets to our government and they view it from a censorship standpoint," said Saria. Hopefully, then the Indian government will be convinced that Loev "must be allowed to screen in its native country."

While Loev is Saria's first feature, it is not his first foray into filmmaking. The Darjeeling-born, Ithaca College BFA graduate has been making short films since 2010. Yet the shift from short to full-length was notable to the director. "Shorts somehow don't come under the same scanner of success and failure once they're finished. With a feature, if you don't get distributed, if you don't reach audiences, it's hard to enjoy whatever success you may find on the festival circuit or with critics."

Saria will accompany Loev to SXSW – marking his first trip to Austin. While he's looking forward to eating a lot of Tex-Mex and barbecue, he hopes attendees look forward to Loev. "I hope they find an emotional, honest, nuanced story that makes their hearts beat, makes them think about their own lives and past loves, the ones they missed, and how they behaved in those situations."