Laura Dunn's The Seer is an anti-screens screen 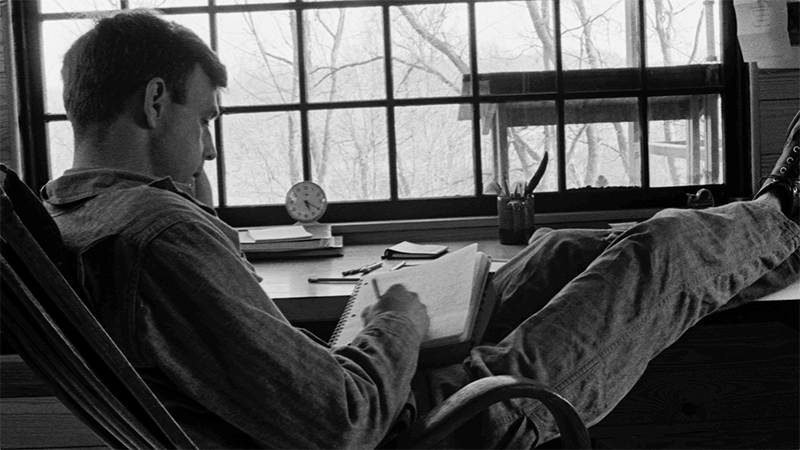 As it happens, Wendell Berry, prolific writer, modern philosopher, champion of agrarian culture, has a well-documented problem with screens. The subject of local filmmaker Laura Dunn's latest feature documentary, The Seer, wrote about his stance in a now-famous essay, "Why I Am Not Going to Buy a Computer," in 1987, and he hasn't budged. In fact, he only appears in this film in old photographs and recordings. "That's an important part of the story actually," Dunn explains. "I wanted to do a portrait of this man, but it was going to have to be an unconventional portrait. I couldn't make just a typical biopic. It's got to somehow be a commentary on the screen itself.

"He is anti-computer, anti-screens, anti-film, anti-TV. I've asked him a lot about this, and his answers are complex, but I do think that he thinks that media and screens of all kinds are contributing to the decline of literacy. That's one of many reasons that he eschews films of any kind. He's declined to participate in films of any kind for a very long time. He doesn't even watch films. He has a very low regard for my medium," she quipped.

It was through written letters with Berry, and much encouragement from his wife, Tanya, and family, that Dunn's project came to life. "I'm trying to get behind his eyes, and there's just a wealth of written material. As we spent time in Henry County, Kentucky, in his world, with his people, there were all these connections that would happen between things I'd read and people I would meet. So it was really kind of an intuitive process." Her goal, to create a likeness of his vision, to bring his words to a larger audience, to show that the relationship humans have with nature directly affects our relationship with art, was complex in its simplicity. "I think art, nature, landscapes, the disconnection between the rural and urban worlds ... these are all big themes that might connect with people who otherwise might not want to see something about industrial agriculture," said Dunn. Summarized by a sentiment from the film that rings true for Dunn, an artist and mother of six boys: "Art has more meaning when it's interrupted by life."

More than its examination of farming and politics, more than industry vs. tradition, The Seer examines how things and people fit together. Just like Berry's words, the film flows through collections of ideas, poetic vignettes of ideological wonderment. It inspires and inquires, for 82 minutes. An ode to Berry's organized arrangements of his 30-plus books and countless essays, the film is divided by chapters.

"I think the documentary world is full of 'issues films' that are important and good, but I think if you have a busy life like so many of us do, you might look to going to a film as a kind of respite from the rest of your life," Dunn explains. "I wouldn't really call spending time in Wendell's world 'entertaining,' but rather very inspiring, very nurturing. I want the film to have the same kind of effect: Let you drop from your world into another world. This isn't a film that's going to make you depressed and sad as much as it will inspire you."

Dunn has amassed several star-studded backers for this project. Nick Offerman, a vocal fan of Berry, lent his support as a talented woodworker and producer. Terrence Malick and Robert Redford, who were both involved in The Unforeseen, are executive producers.

"I would like, in a way, for people, after they see this film, to turn away from screens – the TV and movies – to go pick up a book and go take a walk outside. It's kind of an anti-screens screen."