Don Cheadle does Miles Davis in freak-fusion biopic Miles Ahead 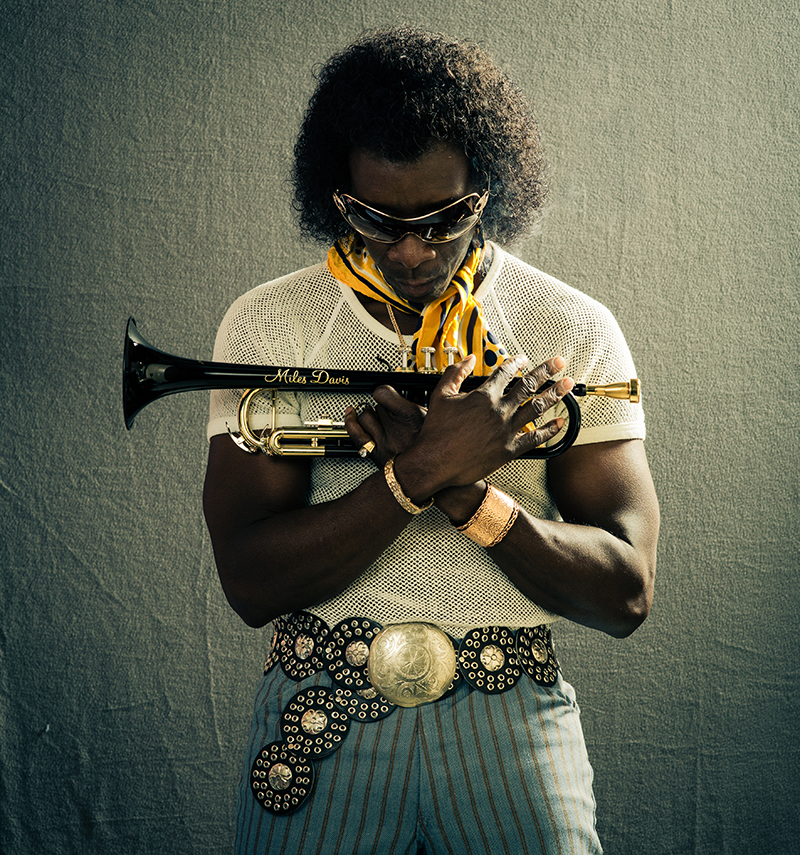 It's easy to imagine what a traditional Miles Davis biopic might have looked like: young Miles learning gospel music in church, encountering the freedom of jazz in a nightclub, giving birth to "cool," leading the attempt to fuse jazz and rock styles, drugs, women, civil rights, et cetera. The movie almost writes itself in our heads. But that's not the Miles Davis movie that Don Cheadle set out to make.

"Our directive was, 'Let's make a movie that feels Miles Davis, not necessarily about Miles Davis, like the Cliff's Notes of his life,'" Cheadle says. "Let's do something impressionistic that feels improvisational and mercurial and electric and goes anywhere it wants to go, which is Miles Davis."

The result is Miles Ahead, a film on which Cheadle takes directing and story credit in addition to portraying the musical icon. It's an unexpected, charmingly oddball film that may be too weird for fans of traditional music hagiographies like Ray and Walk the Line, but will screen well in its natural habitat of late-night, smoke-filled jam sessions.

Miles Ahead picks up its story in the late Seventies, in the midst of what some call Davis' "silent period," five-plus years in which he did not release any music. His voice is already raspy, and he's adopted his late-period look of screamingly loud suits, big sunglasses, and long hair. He hoovers coke and limps around on a bad hip. The plot follows him and a fictional Rolling Stone journalist, played by Ewan McGregor, in their quest to recover a secret session tape stolen by Davis' record label. The film intersperses flashbacks to Davis' earlier life, focused on the rise and fall of his romance with Frances Taylor (Emayatzy Corinealdi), with buddy-action-movie set-pieces for McGregor and a gun-and-Jheri-curl-wielding Cheadle.

At the Berlin International Film Festival last month, Cheadle caused a major stir when he told reporters, "Having a white actor in [Miles Ahead] turned out to be a financial imperative." For critics baffled by the film's anti-biopic approach, this admission neatly solved the question of why Miles Ahead is told with such an off-kilter approach. Cheadle has since walked back his comment, releasing a statement clarifying that he and his team "never moved away from or reworked a concept of the movie for the sole purpose of including a white actor."

On the phone with the Chronicle, Cheadle is reluctant to discuss specific development decisions behind Miles Ahead, but game to criticize the general Hollywood climate for financing films about black lives. "Most movies are money losers; that's just the nature of movies," he says. "So when you take a film where the face of it can look like it doesn't have as broad an appeal, it's easy to tell yourself it's a bad risk. Traditionally, black films have fallen under that regard. But not necessarily by any metric that is provable, and/or necessarily true.

"There's a different treatment that black films get out there in the marketplace, often, and a different approach they get, often, unless they fall into a certain niche," he adds. "So anything that's hard to do – i.e., make independent films – is exponentially harder to do when it's a film like this."

So, is the storyline about old Miles and the Rolling Stone reporter speeding around town, guns blazing, in pursuit of the stolen session tape an authentic expression of the story Cheadle wanted to tell all along, or is it the warped result of a Hollywood factory that can't stand to put a black man at the center of a movie without a white co-star beside him? The complicated answer may be that both claims are true. Cheadle, for his part, is adamant that he did not want to make a more traditional biopic. "The kind of short shrift you end up giving every period, it ends up all just feeling, to me, not very special – and at its most successful, kind of didactic," he says. He credits the 2007 spoof Walk Hard: The Dewey Cox Story with inspiring him to break with cliches of the biopic genre.

Cheadle found a way into the Miles character when he began researching the trumpet player's silent era and the secret, never-heard recording he made in that time of personal turmoil. "The secret recording is absolutely based on fact," Cheadle says. "There's a lot of speculation swirling about what that is and/or was.

"The fact that he was not playing for five years during this period of time, for me, looking at the research, was the incongruence in the story that was interesting," he adds. "This superprolific artist, who impacted the world with his voice, shutting it down. What does that look like? Why does that happen? How do you get back? How do you start talking again?"

As for the caper element, Cheadle says the stolen tape is meant as a Maltese Falcon-style MacGuffin to keep the audience engaged with the film's excavation of Davis' creative demons. It's also a reflection of those demons. "It was our connection to the Frances through-line," he says. "She, in many ways, is the tape, she is the music, she is that thing he's trying to get back to and reconcile and wrestle with, that gets stolen from him, that he tries to retrieve."

In the end, the film lives or dies by Cheadle's uncompromising performance in the lead role, which will make film lovers, and fans of Miles Davis, grateful that the project made it through the Hollywood development maze at any price. Cheadle prepared for the role by learning to play the trumpet and performed Davis' solos onscreen. "That was a huge key to me," he says.

As for the crazy clothes and the raspy voice, Cheadle says he found his way into the character not just by putting them on but by finding a reason for them in his research. "What is it in the character that informs why Miles spoke that way? Doing the research, realizing it was the result of an argument with a manager about a paycheck, that was important," he says. "The way he clothed himself, either to embolden himself or accessorize himself, or to use the sunglasses and clothes as armor, because he's sensitive and that's the way he shields himself, all those things are character things.

"It all at some point becomes part of the bigger picture of trying to find a way to walk with this person that feels authentic," he adds. "But there aren't any little shortcuts or tricks."