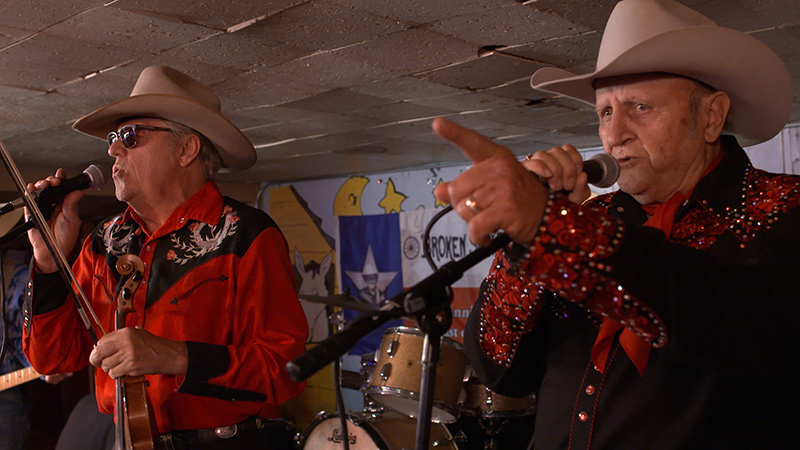 The image alone is striking and powerful: cramped between two new modern condo developments on South Lamar, a single sprawling oak tree and a rustic red honky-tonk, set in a juxtaposition that easily serves as a metaphor of Austin amid rapid growth. Yet as Brenda Greene Mitchell and Sam Wainwright Douglas set out to explore in their documentary Honky Tonk Heaven: Legend of the Broken Spoke, making its world premiere at SXSW this year, the story behind the doors of the venerable Broken Spoke is much more vital than just its substantial history.

"When you go in the Broken Spoke, we have seen people from literally everywhere in the world, and there is this universal appreciation," says Mitchell. "But there is also just this love, this family love, that you really pick up in this place.

"Not everyone knows the story of James White," she continues. "He built the place with his own hands, has owned it for over 50 years, and his entire family works there. So that whole sense of a family running a small business is these days pretty unusual, and just hanging in there no matter what, that's what they've done."

Honky Tonk Heaven overflows with artists testifying to the dance hall's personal and cultural importance, complete with colorful anecdotes and archival footage of the venue's history. Yet ultimately, the doc is less about the room that has been home to some of country music's greatest legends than it is the love story of James and Annetta White. Mitchell and Douglas spend considerable time with the couple, capturing both the intimacy and determination of their relationship and how it has infused everything about the Broken Spoke.

With cameras set up on the dance floor amid the two-stepping couples, that intimacy extends to the patrons and community that the Spoke has built. The film lingers in the low light of the honky-tonk with such closeness that it pulls the viewer in to the unique, otherworldly feeling that encapsulates the space.

"I think everyone has that feeling when they walk through the doors of the Broken Spoke, that we've got a time machine and this is special," attests Mitchell. "My instinct for doing the film was just that this place needs to be preserved. We have a jewel here. Learning how fragile the Broken Spoke is made me wonder what we were doing as a city to preserve these places that are uniquely Austin."

When the film does finally address the development elephant, it's presented in a refreshingly nuanced and balanced perspective. Mitchell and Douglas even interview the developers of the area, who are equally devoted to finding a balance with Austin's history and preserving the Broken Spoke's place.

"This is a struggle that so many cities have beyond just Austin," offers Douglas. "The places that really make a city what it is are often threatened by a really healthy economy and burgeoning population. Everyone wants to rail at developers, but let's stop screaming at each other from our different positions and really figure out common goals that can keep our cities alive with their character."