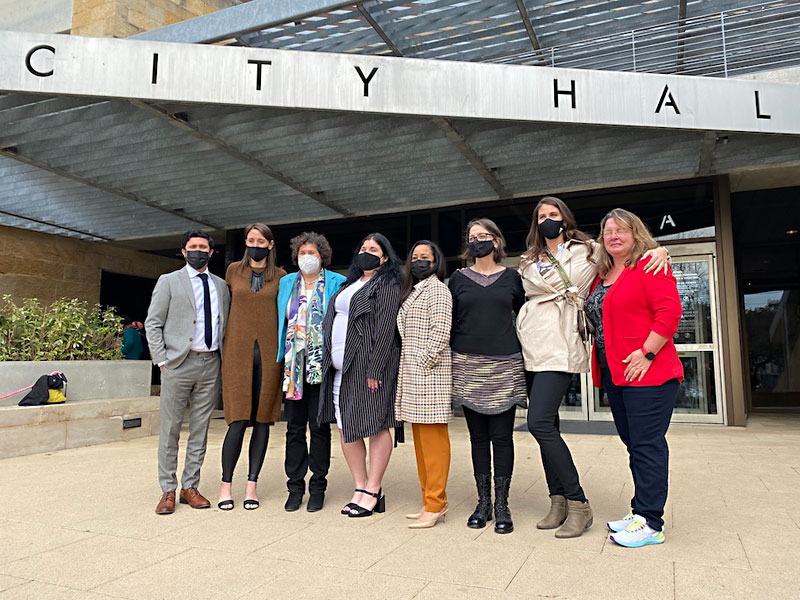 "We should all be sorry, as I am, that you had to endure the post-trauma and that our system did not fix those challenges on our own and that the burden fell to you, in large part, to correct what was going on," Mayor Steve Adler said during Jan. 27's City Council meeting. "Please know you made this a better city. There is still a long way to go, but you have set us on a better path."

With those words, and then a unanimous Council vote, the ongoing legal battle between 15 women rape survivors and the city of Austin came to end.

"I feel like we have accomplished a hell of a lot," Hanna Senko told the Chronicle. The class action filed in 2018, alleging that local law enforcement so mishandled survivors' cases as to violate their constitutional rights, has led to policy and practice changes within the Austin Police Department and by the Travis County District Attorney, and influenced the passage of statewide legislation in 2019, noted Senko. "The past couple of years have been incredibly difficult at times and incredibly rewarding at other times. In the end, I want to believe that it has all been worth it."

Another survivor-plaintiff, Heather Sin, said we likely won't know for some time whether joining the suit was worth it. "Sadly, the police's track record makes me skeptical," she said, noting that during settlement talks she had to continuously push for disability-related training modules to be added. "I admit my own skepticism, perhaps even bias, but I do continue to work on allowing them the opportunity to change. I want to believe police can be different, but it will take all of us to affect that."

Over the course of an hour, Council members individually thanked the plaintiffs for their work. With time limits suspended, Senko spoke, as did Marina Conner and Mary Reyes, known as "Amy Smith," the lead plaintiff in the federal suit. Notoriously, the botched DNA testing of Reyes' rape kit helped shut down APD's forensic lab in 2016.

District Attorney José Garza, whose two predecessors were named plaintiffs in the suit, spoke in support of the survivors and the settlement. Assistant D.A. Dana Nelson shared statements from Erin Martinson, director of the D.A.'s Special Victims Unit, and Neva Fernandez, who leads the office's new Division of Victim Services. Though he did not speak, APD confirmed that police Chief Joseph Chacon, whose two predecessors were also plaintiffs, was in virtual attendance. In a statement to the Chronicle, APD said it's "committed to making improvements, and [has] already made many meaningful changes in our policy to provide the best care and service to survivors of sexual assault."

In an interview, Council Member Greg Casar called the meeting "a more meaningful moment than any of us expected." All the way back in 2016's budget deliberations, Casar pushed back on APD for trying to dismiss the backlog of untested rape kits as "making mountains out of molehills." With his final Council meeting on Feb. 3, he called the settlement "almost like a goodbye moment for me." One of his goals, before stepping down to run for Congress, was to settle the suit; Casar and CM Alison Alter have led Council in seeking justice for survivors.

The original class action was filed by three women in June 2018, with five more joining in August; their cases span the decade from 2008 to 2018. In February 2020, U.S. District Judge Lee Yeakel dismissed the bulk of the suit, saying the matter involved state policy (citing the 2019 bills) and belonged in state court. That September, another four women, led by Senko – whose case dates back to 2006 – duly filed a state-court version of the suit, again detailing their assaults and the continued retraumatization by the local justice system.

In June 2021 – just days before the 5th U.S. Circuit Court of Appeals heard the survivor-plaintiffs' appeal of Yeakel's ruling – the county settled under D.A. Garza. At least two women, not identified publicly, signed onto the litigation against Austin and APD thereafter; now the city, too, has settled – offering an official apology to the plaintiffs, who will each receive $55,000.

So far, $3.5 million has been spent fixing the problems cited in the survivors' lawsuit. This includes clearing the city's rape kit backlog; creating APD's sexual assault cold case unit; hiring additional victim service counselors; and requiring police academy training on better handling rape cases. APD is now legally required to take a formal statement from each survivor who wishes to give one, prior to closing a rape case. Addi­tion­ally, an audit (championed by Alter) of APD's handling of sexual assault – by the Police Executive Research Forum, Wom­en's Law Project, and Wellesley Centers for Women – is expected this spring; its recommendations are a priority. Another $862,000 is earmarked for future implementation.

“The past couple of years have been incredibly difficult at times and incredibly rewarding at other times. In the end, I want to believe that it has all been worth it.” – Hanna Senko

For Conner, the settlement is a win. "We were heard," she said. "It feels amazing." One of the original three plaintiffs, Conner first asked Council for support in testing the thousands of backlogged rape kits, including hers, in 2016. "Going through the lawsuits, and all the work that I've put into the community, has given me my power back," says Conner. "I was stripped of all my power that night and to stand here today, knowing that I have the power to get, what to me is almost a $5 million lawsuit – because all that money is being allocated to sexual assault services ... that takes a lot of strength and a lot of power and influence to do that."

Conner's feelings are not matched by all of her fellow plaintiffs. Kristen Troken, known as "Sarah Jones" in the federal suit, believes "substantial change has been promised and put on paper, but actions speak louder than words," she wrote via email. "I want to see action."

Likewise, Senko is torn. "Even though we have accomplished so much already, the fact that we had to fight for as long and as hard as we did only proves how much work is left to be done in this space." Senko continues, "I believe City Council was sincere in their remarks as they voted to settle our case, however, I also recognize that it takes a lot more than sincerity to ensure this issue stays prioritized." She hopes the settlement will keep things on track.

For Reyes, whose case has continued on and off for a decade, "closure" is not the correct word. "I do feel like the acknowledgment that we received from Council, and the hard conversation that was had, provided a space that is allowing me to take larger steps towards healing," she said. Before Thursday's vote, Reyes publicly forgave Council.

She's experiencing mixed emotions about settling. "I'm relieved that this is one less thing to wake up and worry about, but it has stirred up a lot of unsettled questions: Did we forge forward far enough? Was it worth it? Was it enough?" Yet when asked if she'd do it all over again, she said, without a doubt, yes. "I had to make sense of my pain. It needed to belong somewhere. What I wasn't anticipating was the magnitude of its effects systemically and emotionally on people in the community."

Jennifer Ecklund, an attorney for the plaintiffs, called the settlement a "measure of justice." Pointing to the various changes made at APD and the D.A.'s Office, Ecklund said, "The women who brought these lawsuits have finally been recognized and heard, and can rest knowing their cases and courage made a difference." Ecklund applauded Austin and Travis County's "willingness to improve their broken systems," and reiterated her support for the plaintiffs "for showing the world that light can come from darkness, and that change is possible."

Still, a feeling of "unsettledness" remains. As Senko noted, "It doesn't matter what laws or policies are in place, if the leaders required to uphold them don't believe in them, stand behind them, or care to enforce them." With his final days on Council nearing, Casar credits the survivor-plaintiffs for making him a better council member and said their work is "proof of what movements can do.

"What the survivors did through the settlement is to set a higher standard – that doesn't mean that it's over. But it's proof that, if elected officials and the press and community leaders are willing to listen instead of dismiss claims of injustice from people who are hurt, that we can actually change as a city."

Sin, whose assault took place in 2014, doesn't know the status of her case. Her rape kit wasn't tested until the suit was filed in 2018; she's received no updates since. "It is disturbing that we have to legally force this institution to do what they were supposed to be doing all along, but it is uplifting to think a world like that might exist in my lifetime," Sin said.

Reyes shares that hope: "There is an opportunity to become a model city ... When we start owning, we set a tone, a standard, and an operating procedure for navigating the trauma surrounding sexual assault. That's the ultimate impact of this work. That's how accountability breeds more accountability."

The 15 women will continue following the city's efforts to make sure the terms of the settlement are implemented. "We set them up to succeed," Conner said, adding: "If they do mess up, we'll be right back there, holding them accountable like we have."