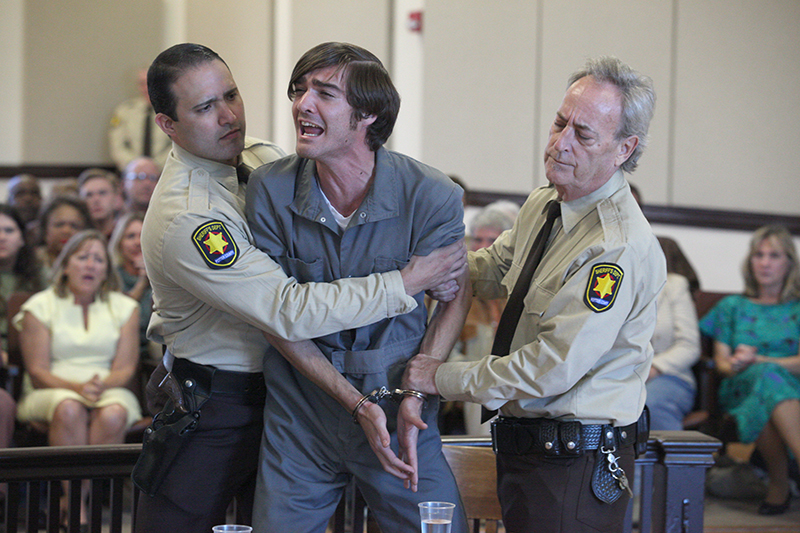 This is what's not in dispute: On Halloween night, 1981, 76-year-old nun Sister Tadea Benz was stabbed, raped, and left for dead in Amarillo, Texas. Johnny Frank Garrett, a 17-year-old, mentally handicapped resident of the then-smallish and righteously conservative Panhandle town was fingered for the crime and sentenced to death. Despite protestations of innocence to the very end, Garrett was executed by lethal injection, due in large part to a local clairvoyant with the downright fascinating name of Bubbles, who psychically placed Garrett at the scene of the crime. What is now widely considered the murder of an innocent man by the state of Texas is also the subject of the newest film from Fantastic Fest and SXSW fave, the fiendishly outré UK-based director Simon Rumley.

Before his execution, you see, Garrett penned a theatrical curse on all those who had wronged him, be they jury members, officers of the law, or kin of either. And that's where Rumley's particular form of cinematic storytelling – horror, with the basest sort of bad, blackened humanity attached – comes in.

"As is often the case," Rumley says, "I was sent the script by my agent, read it, liked it, and then thought 'Is this true?' So I went online and I found a documentary called The Last Word [by Jesse Quackenbush]. I watched it and I thought, 'Wow, that's amazing, I can't believe that.' It was a case of a bad legal attitude and the system which affects a man's life. I think I may have just watched West of Memphis at the time, and of course this is very similar to that in many respects as is Making a Murderer. It's all really jaw-dropping. And of course [the real-life execution of Johnny Frank Garrett] also comes with the added attraction of having a curse, which gives it a different flavor from some of those more straightforward documentaries."

Rumley's no stranger to Austin. His film The Living and the Dead won a quintet of awards, including Best Picture, at Fantastic Fest 2006, he shot the entirety of his 2010 follw-up Red White & Blue here, and he's currently kipping down in Alamo Drafthouse founder Tim League's basement.

While set in Eighties-era Amarillo, the production was actually shot in Shreveport, La. Says Rumley: "We broached the subject of actually shooting the film in Amarillo with the city officials and [producer Frank Mancuso Jr.] was told, 'No, we don't want you here.'"

So does Rumley believe in the Johnny Frank Garrett curse? After all, more than a few jurors, attorneys, and persons tangentially associated with Garrett's execution have, indeed, died under suspicious circumstances.

"I don't really believe in the supernatural, per se," Rumley responds, "but having read a lot of [Garrett's] letters, held them in my hands, and then look at the way some people associated with the case died, I think there's a collective case of guilty conscience. I think the whole town very much conspired and ganged up against this kid, Johnny Frank Garrett. Everybody, even the priest who knew him, wasn't allowed to testify in court. I think in the end people realize that they've done something wrong and the guilt sets in. Certainly there are a lot of definitely weird things and strange coincidences that happened after his death, so it's very easy to look at the whole thing and go 'Holy fuck!'"