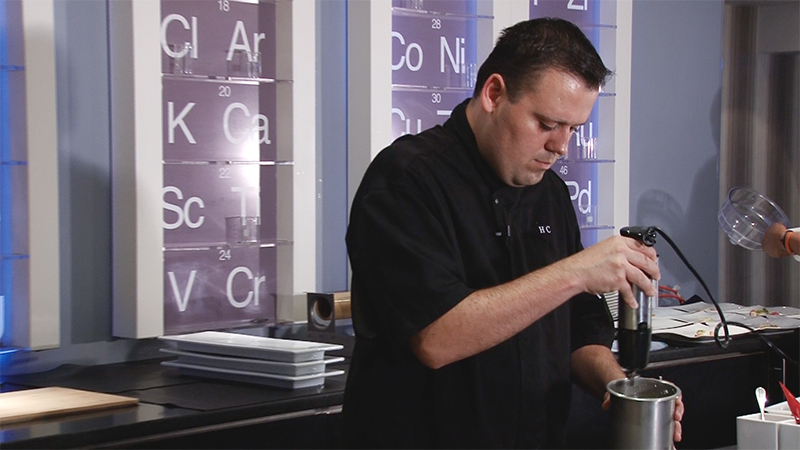 You're seeing new movies, bona fide world premieres, as part of the film programming at SXSW 2016, and you're also going to be eating a lot of food between those cinematic invasions of your sensorium. Lucky you, because, even if you don't already live here, you've probably heard of the burgeoning world-class culinary scene in this city, right? Maybe even something beyond Franklin Barbecue's rightfully praised brisket?

Sure, but turn your attention toward Chicago for a moment, cineaste. The Chicago of several years past, specifically, when Homaro "Omar" Cantu's Moto restaurant was tearing the country a new, um, alimentary canal with its experimental forays into molecular gastronomy and that whole chef-as-mad-scientist scene that Ferran Adrià had kicked off in Spain's ElBulli.

That's what filmmaker Brett Schwartz has done with his Insatiable: The Homaro Cantu Story, having gained documentary access to the famed Windy City chef's life for three years to record Cantu's day-to-day routines and reinventions, his triumphs and tragedies, all those things that led the innovator from a troubled childhood to a coveted position at Charlie Trotter's, from the Moto-driven heights of fame to whatever personal abyss instigated his suicide in April of 2015.

But why tell this story, this definitely foodie narrative, in particular? We asked the director – whose previous films Bassmaker and Mashed Media revealed the stories of, respectively, a bass-guitar maker and the putative print-journalism apocalypse – and this is what he told us.

"For me, as a filmmaker and a documentarian, it's about jumping into a new world. I started it not at all being a foodie, not knowing much about the culinary world. I was really taken, years ago, by the death of Steve Jobs and how people mourned his loss, how they looked at him as a visionary. But what struck me ... was how much we need visionaries and genius, and the sacrifices they make to have that laser-like focus on whatever it is they're trying to do, in changing the world. And I wanted to know what kind of sacrifices people have to make at home, with people they love. What makes them tick so that, when they're working on a project, they don't go to bed until, like, four o'clock in the morning? What makes them wanna get up every day and change the world?

"So I found out about Homaro in about 2005, and I started reading up on him. And, later, because he was moving into that social innovation, that entrepreneurial space, I felt like I could find a way to get inside that brain. So the initial impetus was outside the culinary world."

And yet, Mr. Schwartz, you did a really deep dive into that culinary world.

"I did," says Schwartz, "and my hope is that the foodies and the culinary people will enjoy that dive, yes, but that the film is recognized as more universal. It's a story about, yeah, a chef – and, obviously, a kitchen – but it's more about somebody who dreamed very large and transcended, we thought, adversity."