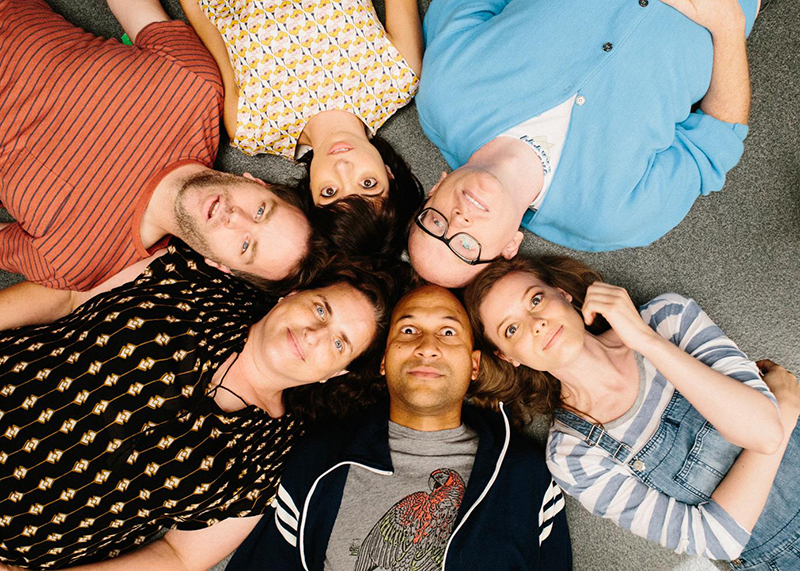 Mike Birbiglia is no stranger to turning the lens on himself. From highly personal stand-up specials to his 2013 directorial debut of Sleepwalk With Me, the comedian has trafficked in telling the types of stories that make audiences think, "That could only happen to Mike." With his second film, Don't Think Twice, making its world premiere at SXSW, he takes on a slightly larger worldview: everyone else's.

"I've had more people watch the movie and say, 'That's my life, you made a movie about my life,'" says Birbiglia, who wrote and directed the film, of famous fans like Saturday Night Live's Vanessa Bayer and Jorma Taccone. "I didn't mean to do that. It's just a thing that nobody has made on film yet somehow, and it captures that thing. I'm excited it captured that thing, but I didn't know it was going to."

That "thing" in question is just the minuscule, easily resolvable matter of existential dread; particularly, the idea that as we get older, success may not just be a moving target, but an ever-evolving one that can change on a dime. Set in Manhattan, Don't Think Twice follows a group of six comedy hopefuls in a locally successful improv troupe, as they navigate auditioning for a Saturday Night Live send-up, the shuttering of their Upright Citizens Brigade-esque theatre, and the realities of confronting their own individual talent, while trying desperately to hold their troupe together as life begins to change.

For Birbiglia, channeling the intricacies of group dynamics wasn't a complete stretch. "When I was in college, I was cast in the improv troupe at Georgetown. I went on to cast Nick Kroll, Kroll cast John Mulaney, and there was a continuum of the whole thing," he says. "So when I moved to New York, I moved with my improv group. It was me, Kroll, Brian Donovan, Ed Herro, and Chris Fosdick, and we had this group, Littleman, that performed semi-regularly at UCB. And then the group broke up. Some people moved away and had kids, some people pursued writing. I pursued stand-up. And that era of our lives ended because we all went separate ways."

But for all its roots in comedy, Don't Think Twice is a shape-shifter of a film, both in genre and tone. It's a clever film, set in the world of comedy, yet it's neither a comedy, nor is it a movie about comedy. Whereas Sleepwalk With Me focused largely on Birbiglia's own journey in stand-up and reckoning with his own talent, this time he uses faux improv troupe the Commune – made up of a stellar cast including Key and Peele's Keegan-Michael Key, and Community's Gillian Jacobs, as well as Birbiglia himself – to explore just how skewed our perspective of success can be when you're no longer working alone.

Finding himself back at UCB running a weekly improv show based on his dreams after the release of Sleepwalk With Me, Birbiglia says the idea for Don't Think Twice actually came from his wife, Jen Stein. "She said to me after a show, 'What's so crazy to me about improv is how you're all equals onstage, yet in life, that person is a multimillionaire; that one lives in Bushwick with five people,' and I started laughing so hard, because we don't all get along so great. That, in a lot of ways, is the surface of the whole thing. For the art form, we get along, but behind the scenes there's a lot of 'That's not fair that he got that,' or 'How come I didn't get that?' and I realized: That should be a movie. That's every football team, that's every office of people who work in literary circles. Any group dynamic has that thing where someone gets something, and everyone else says, 'How come they got that and I didn't?'

"I think so much of it has to do with the way in which we all in our 20s, for some stupid reason, viewed success as a singular idea," adds Birbiglia. "I feel like in your 30s, you start to understand that life isn't about this singular goal. It's much more complex than that. For me, that's what it was about. The idea that it was this group of people all trying to get the same thing in life and realizing, 'Hey we don't actually all want that thing. We kind of want it because we're told we want it, or because we don't know what else to want.'"

But how do you capture those complexities, without making any old indie about six bitter people struggling with their own neuroses? You use improv. Though the old saw may go that the only thing worse than improv is fake improv, here the fast-thinking comedy format serves as more than just a device, instead touching upon a very real lesson Birbiglia found that had followed him even after he'd left Littleman for stand-up and writing.

"After Sleepwalk With Me, I had this real epiphany about improv and the role improv played in my life. These principles of improv, of just saying 'yes,' to the world and to your partner's ideas, is a life philosophy and it's also a theatre philosophy," he elaborates. "That's part of the reason I called it Don't Think Twice. That and its reference to 'Don't Think Twice, It's All Right' by Bob Dylan, which is the greatest breakup song in the history of rock & roll. I always thought of the movie in terms of what each of the six characters' 'don't think twice' moments were; the moment that makes them say, 'No, I'm not going to do the thing everyone thinks I'm going to do.'"

In shooting Don't Think Twice, Birbiglia has already defied expectations of what everyone thinks he's going to do: He's made an ensemble film with six highly individual characters, after years of storytelling his own life onstage. He largely credits the process to the table reads he and producer Ira Glass would host in Birbiglia's living room with a rotating cast of comedians, including Taccone and Bayer.

"I'd do nine or 10 readings of the script at my house, and then we'd all have pizza afterwards and talk about what the movie meant to us," he elaborates. "So many people contributed an 'I felt like this,' or 'I had a story in my life like this,' so in a lot of ways it's got some rock soup to it. It's got a lot of people saying you can add something like this to it, or that to it. This is just everybody's story."