A Stray looks at Somali refugee life in the Midwest 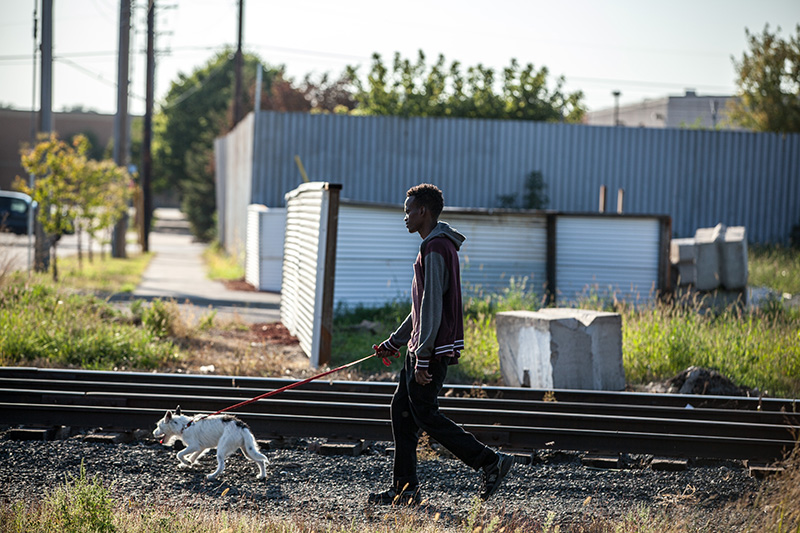 Writer/director Musa Syeed's new film, A Stray, provides a day-in-the-life of Adan, an endearing young man doing his best with the hand he drew. As part of a Muslim-Somali refugee community in Minneapolis, he doesn't have it easy. Life gets harder when, while running a delivery for his new job, Adan nearly hits a stray dog. Even though, as a Muslim, Adan believes the animal unclean, he takes it in for the night. When his landlord/boss (also a Muslim) finds the dog, he fires Adan and kicks them both out. Adan is now homeless, accompanied by a four-legged companion many in his community believe impure.

The storyline might seem odd at first. After all, owning a dog is commonplace. But that's not true for all Americans. "In a lot of Muslim communities, it's a complicated thing," says Syeed. "There are certain religious opinions about the impurity of dogs. I think some people have taken that to be a complete aversion to dogs – like you can't even touch them. And that's a more conservative opinion," he says. But for other Muslims, "it can be more identity politics than religion," he says. "Having a dog seems like a white thing. It's something that white people do. It's not something that we do." Dogs further have an association with the colonialist West, arriving to Muslim areas with white colonists. "And a lot of Muslims in America come from former colonies of the West," says Syeed. Because of this tension, the film offers a fresh look at the American archetype of a man and his dog – asking timely questions like: "How do these two things that seem to be incompatible engage with each other? Is there some way for them to connect?" says Syeed.

Similar to Syeed's previous film, Valley of Saints, A Stray feels like a dreamy documentary. "I default to documentary usually," says Syeed. "But I choose to do fiction when I need to create a relationship or conversation that isn't already happening in the world, which I could otherwise document." In this case, that means showing a black Muslim refugee community in a more personal manner. "The Muslim identity is so politicized," says Syeed. "It was important to not just show the political dimension of life, but also the everyday and the spiritual." A Stray shows Adan navigating the Somalian refugee community as it is: "A very vibrant, thriving community in spite of all the racism and xenophobia and other challenges they face," says Syeed – adding, with a playful jab at his native Midwest: "There's a real resilience and creativity to how they've created a community out of nothing ... in Minnesota of all places."