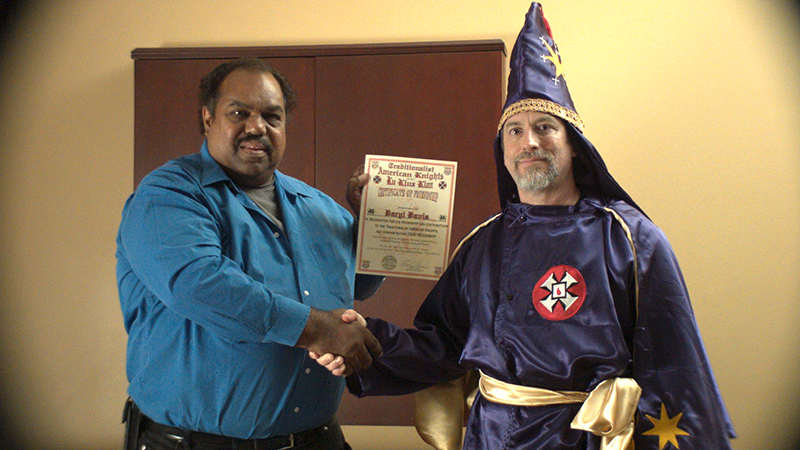 In an era when racism tends to be subtle, nebulous, and invisible to its perpetrators, it's easy to forget there are people who overtly practice racism as a point of pride. "I certainly undervalued how much it's still around," says director Matt Ornstein, who met some of the country's most influential members of the Ku Klux Klan when filming his documentary Accidental Courtesy: Daryl Davis, Race & America. "In person, you sort of react like someone is living in this asbestos-laden house and smoking unfiltered cigarettes – like, 'You're still living this way?'"

Given the institutional racism embedded in so many areas of American life – from criminal justice and education to housing and health care – it may also be easy to dismiss the modern-day KKK as irrelevant. But Daryl Davis, the film's subject, does not. As a black American who grew up in the Civil Rights era, he's had a burning question since childhood: "How can you hate me when you don't know me?" In his quest for the answer, he has spent the last two decades reaching out to members of the Klan and, with some, even forming lasting friendships. As a result, many have left the Klan, bequeathing to Davis their robes and hoods. He has collected upward of two dozen.

Ornstein's film follows Davis, a touring musician, around the country as he meets with KKK members – generally one on one, often over a cup of coffee – for disarmingly casual chats about their beliefs and his own. It's hard not to watch these encounters without anticipating a moment of magical conversion, or at least some artful rhetorical maneuvering. But that's not really Davis' style. Mainly, he listens. "He's doing something fascinating, and it's to a certain extent ambiguous," says Ornstein. "He doesn't have a special technique that other people don't have. He's just willing to make the attempt – it makes him more approachable for some people."

Ornstein, a filmmaker interested in "examining people and their work," intended to make a film exclusively about Davis. But events unfolding over the course of filmmaking, including the shooting of Michael Brown in Ferguson, Mo., pushed the project in a different direction. "Every time I came to shoot Daryl ... there had been a new shooting, or a new similar circumstance like that," says Ornstein. "It felt irresponsible or incomplete to ignore them."

The film gains momentum with the emergence of the Black Lives Matter movement, and an exchange between Davis and two young Black Lives activists – skeptical that Davis' collection of robes represents meaningful change – prompts the most heated moment in the film. The scene makes for a strange contrast with Davis' relatively genteel conversations with his friends in the KKK. But Davis is no stranger to such criticism, says Ornstein. "He had experienced it before," he says, "and I think that I didn't totally know what he meant until I saw it."

When it comes to Davis' unusual pastime – which lies somewhere between hobby and activism – even seeing it does not make it easy to understand. But it does make one thing clear: The path to changing hearts and minds is a winding one.