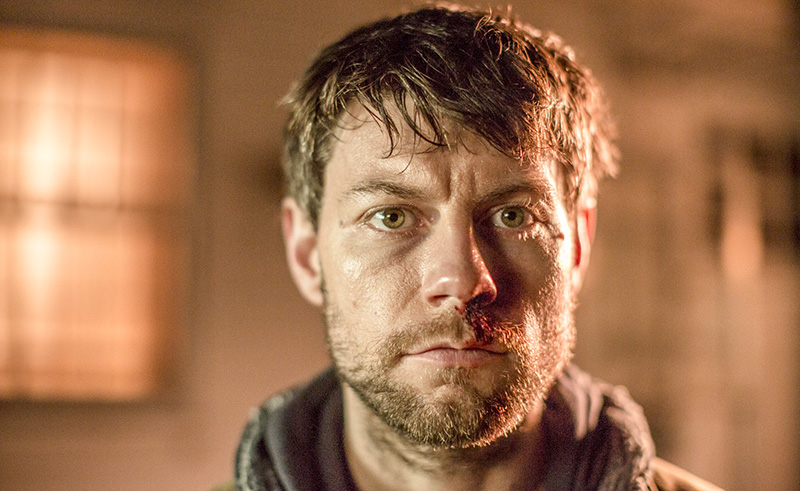 Wingard became a leading name in indie horror with home-invasion shocker You're Next, but in 2014 he found himself at a loose end. He was wrapping up promotion on The Guest, and development of future projects was moving slowly, "so I ended up on this search to find something to keep myself busy." That's when he was sent the script for Outcast. Based on the comic by Kirkman and artist Paul Azaceta, the Cinemax adaptation pits Patrick Fugit (Almost Famous) as Kyle Barnes against demonic forces that have plagued his life since childhood.

The director was initially reticent because just about every possession drama rehashes The Exorcist, but he was fascinated by Kirkman's radically different take on the genre. The decider was that he would direct the pilot and be "the one setting up a template that other filmmakers could take and do their own spin on. I wouldn't have been interested in doing it if I was picking up midseason on somebody else's show. I really wanted to set the tone, and be able to step back and see what other people did with the look and the feel that we designed."

Yet all his world-building was in someone else's sandbox, and even though he was intrigued by the script, the indie film guy thought he'd get beaten out by a more experienced TV director. However, Kirkman was looking for a fresh voice. Wingard said, "He didn't just want it to be another TV director who would do a good job. He wanted someone that would have a really interesting perspective."

Wingard's first job was sitting down with Kirkman and showrunner Chris Black for Outcast 101. He said, "From the get-go, you have to say, what are the rules of the possession?" It wasn't just about avoiding genre cliches, but building the mythology. "I wanted to pepper in little seeds that would pay off later, that hint at where the show's going. Once you're a season or two in, you can go back to the pilot and be like, oh, there's these really interesting Easter eggs here."

Having Kirkman on set also meant some friendly advice on adhering to the story's sense of creeping dread. During one scene, Wingard (ever the Eighties horror fan) saw an opportunity for a jump scare. "I was a couple of takes in, and Robert comes over and, he's like, 'So, what are you doing right there?' I told him, I'm doing this and this. 'Maybe you should read the script again, and shoot what's on the page.' I went to shoot it his way, and I went, oh, he's absolutely right. This is what this show is."