Cycling With the Psycos 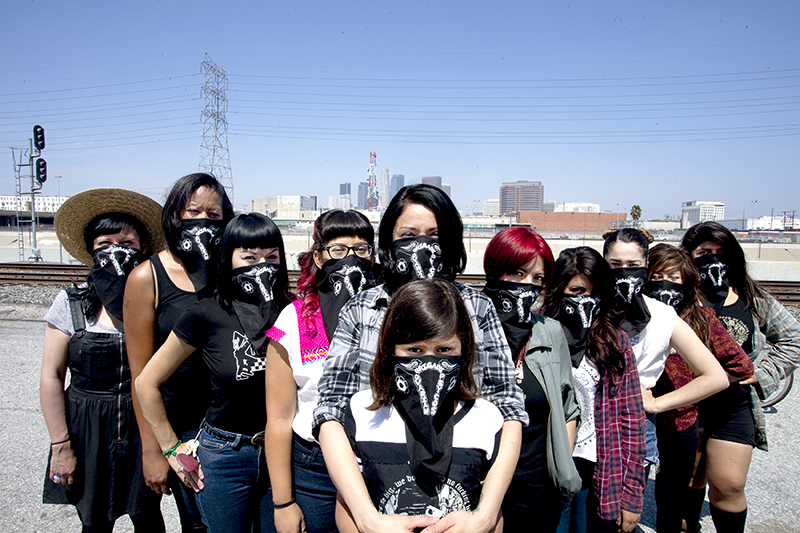 In some parts of East Los Angeles, the Ovarian Psycos are hard to miss. "They have sort of a riot grrrl, punk, militant, Zapatista aesthetic," says filmmaker Kate Trumbull-LaValle. In her new feature-length doc, Ovarian Psycos, she and co-director Joanna Sokolowski follow the activist group, which calls their work "women-of-color feminism." The film focuses on the Psycos' founding member Xela de la X, a single mother, activist, and poet-MC who started the group back in 2010. It highlights Xela's struggle to balance her role as an activist leader and as a mom in a community working through issues of sexism, poverty, and racism.

The cyclists' special brand of feminism embraces the indigenous heritage of its largely Latina community base living in East L.A. It's a counterculture feminist group primarily for women of color. "The reason they're so specific about this being a women-of-color space – run by women of color for women of color," says Trumbull-LaValle, "speaks to the fact that 'Feminism' (with a capital F) doesn't recognize the complexities that race and class bring to the table when we're talking about gender inequality." That sentiment isn't unique to the Psycos. It has its roots in the Chicana movement predominant in East L.A. during the Sixties and Seventies. "Women who worked in La Raza, or the Movement, often felt that the issues important to them – issues about sterilization or issues about machismo, misogyny, or sexism – weren't taken as seriously," says Trumbull-LaValle. "They were always secondary issues. And then when they went to work with the mainstream feminist movement, like NOW and abortion rights, they felt like the issues of race were still really relevant, and that white women and mainstream feminists often ignored those factors, like race and class," she says. "I think the same thing stands for Ovarian Psycos." A sentiment likely shared by many women of color in Texas who too often bear the brunt of the state's anti-women legislation.

Historic murals by Chicano artists and other remnants of the Chicano movement serve as backdrops for the film, highlighting their prevalence in the Psycos' identity. "It's something undeniable," says Trumbull-LaValle. "And it's something they inherited. That's what makes [the Psycos] so interesting. They're calling attention to that, and also redefining civil rights for themselves." One special weapon in the Psycos' arsenal for civil rights: the bike, which they use to rally and empower group members. They schedule rides "on the streets and in neighborhoods or at night or in places where [women] might not feel safe," Sokolowski says. "Just the act of being visible on the street is really empowering." The rides also provide a time and a place to discuss important issues, and many group members can't afford other modes of transportation anyway. "A lot of these women can't afford gas. They can't afford a car," says Sokolowski. "So a bike really is the only alternative for them."