e-edition   |   pdf
ON THE COVER:
A Parliament of Experts
news

A Parliament of Experts

Did 'expert testimony' convict an innocent woman of murder?

No talking at City Hall unless we're all invited

A nuke offer and a guilty plea

Beyond the Super Bowl

The Place 3 council candidate kicks off his campaign

The World According to Voter ID

How to make your vote count if voter ID passes

Have Your Water and Drink It Too

Can the state save water and money at the same time?

What Your Senators Will Be Up To

The War on Talking About the Drug War 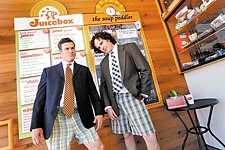 Host your own Tex-Mex Super Bowl party, buy your sweetie a heart-shaped pie or pizza pie, or discover other food news

This could become your go-to Mexican restaurant

Tao of the Dead

You're Going To Want To Remember This

Do a Little 'Dance

Austinites past and present converge on Park City

Barbarians at the Box Office

AFS Documentary Tour: 'For the Love of Movies'

It's a Win Win for everybody

Mike Leigh directs this brilliantly acted film about the loneliness experienced by those shut out of the family circle.

Ben Affleck, Tommy Lee Jones, and Kevin Costner star in this drama about what happens to company men after they part company with the company.

From Prada to Nada

Former Spy Kid Alexa Vega co-stars in this comedy that provides a Hispanic spin on Jane Austen's Sense and Sensibility.

In this supernatural thriller, Anthony Hopkins plays a Vatican-based exorcist who trains a doubting seminary student to drive out the Devil.

When spelunkers rappel into a remote cave and get trapped by storm runoff, the plot and dialogue become as soggy as the characters.

A father-and-son con-man team come to terms with their estranged family in this Bollywood masala.
arts & culture State of the State

This drama about the Texas writer is informative, entertaining, and inspiring

Page Two: A Column Where First We Ramble

Then we let others blow our horn. And with SXSW 2011 only weeks away, there's lots of horn blowing still to come.

The lady behind the big Texas ladies, art shake-ups, and what to do, what to do

The Gay Place not only is, but will continue to be ... and better

Plywood, water, the human heart, the kilogram, and Clint Eastwood