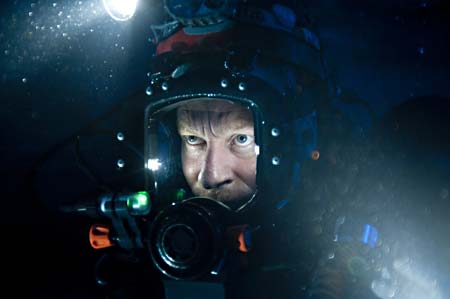 Producer James Cameron's fondness for the deep, dark fissures in both man and nature takes a serious hit with this messy, atrociously written, and unevenly acted descent into a subterranean adventure that's supposedly based on "true events." I doubt very much that a crazy American billionaire with panicky murder in his eyes figured into those events, but as it turns out, Welsh-born actor Gruffudd, as the excitable Yank in question, is the most entertaining thing in Sanctum. Along with his fans, Cameron (one of six producers attached to the film) apparently recognized the similarities between Sanctum's script (penned by Andrew Wight, Cameron's producer on Ghosts of the Abyss and Aliens of the Deep) and his own deep-diving melodrama, The Abyss. But Sanctum, which follows spelunker Frank (Roxburgh, fittingly flinty), his estranged rock-climbing offspring Josh (Wakefield), and a handful of other unfortunates as they rappel down into a huge cave in remote Papua New Guinea and then become trapped by storm runoff, is no Abyss. Those audiences who have complained about the clunky exposition and mawkish emotional dialogue in Cameron's films will discover the "King of the World"'s own dramatic talents to be on par with the Bard in comparison to the shouty, over-emoted hokum on display here. Not everything here is awful, though. Cinematographer Jules O'Loughlin acquits himself more than admirably. Much of Sanctum was filmed underwater without benefit of CGI, which is still a difficult, dangerous, and time-comsuming proposition 22 years after Cameron revolutionized water-soaked drama with The Abyss, and O'Loughlin makes the most of the claustrophobic caving sequences. There's also Roxburgh's gritty turn as a team leader who must make life-and-death (and -death, and -death) decisions at every freakishly hairpin turn. Unfortunately, what might have been a perfectly acceptable 2-D movie was instead upgraded to unnecessary 3-D, which leaves the images looking dark when the action is underwater and curiously washed-out when it's not. Sanctum serves as little more than a reminder that, yeah, Cameron's own scripts might not be the stuff of legend, but his overall filmmaking abilities surely are. 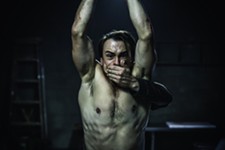