The lady behind the big Texas ladies, art shake-ups, and what to do, what to do 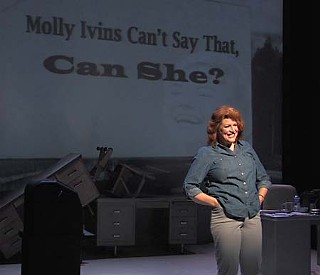 AND THE AWARD GOES TO ... If I could only give out my own Best Actress award during this awards season ... well, I can give it out, can't I? I award it to the fabulously talented local luminary Barbara Chisholm. Yes, she is Chronicle family, having a luminous career as writer for this very paper, as well as being the beloved wife of Austin Chronicle Arts Editor Robert Faires, but neither figures into my consideration at all. What does figure into my consideration is that she has brilliantly portrayed some of my favorite famous females – Angelina Eberly (heroine of the Texas Archives War, whose statue dominates Congress Avenue), Alice Waters (famous foodie and Chez Panisse proprietor), Lady Bird Johnson (surely I don't have to tell you who she is), and now the late political columnist Molly Ivins – so expertly it's as if you're sitting at their feet as they talk. Says Chisholm with her usual humor, "I would like to have a rider in my contract that I get right of first refusal to play all iconic Texas women (including Barbara Jordan, dammit!) but Holland Taylor and lawyers are making things difficult for me." If you're one of the rare Austinites who hasn't seen Chisholm perform, get your ass to the Zach Theatre and see her in Red Hot Patriot: The Kick-Ass Wit of Molly Ivins.

MUSEUM CHAT Things are shakin' at museums across town. The Blanton Museum of Art has just announced the departure of Jonathan Bober, senior curator of European art. Bober, who has been with the museum for almost 25 years, has been appointed to the oh-so-prestigious position of curator and head of the Department of Old Master Prints at the National Gallery of Art in Washington, D.C. This is a great loss for the Blanton and for Austin, but a big gain for the entire nation... Heads are still spinning over the announced departure of Dana Friis-Hansen, executive director of the Austin Museum of Art. He has done some terrific work for the museum and will be sorely missed. Also, AMOA has sold a parcel of land that was to house a new museum building to the county for an all-new courthouse. We do need a new courthouse (God knows – and so do you – that I've been to the current one), but also one with a different name. Frankly, Heman Sweatt, for whom the current courthouse is named, sounds vaguely ... oh, I don't know, like a gay porn movie?

BEYOND GONE Well, my favorite jewelry store, Beyond Tradition in the 2nd Street District, closed its doors forever. They had such unusual and spectacular pieces; I was practically their walking billboard and will deeply miss them. Best of everything to owner Kappie Bliss and her husband, Charles.

VALENTINE'S TREAT Food, fashion, music, entertainment, and original art can be had at the Secret Circus, Monday, Feb. 14, 6:30pm-midnight, to be held at the Mansion (2312 San Gabriel). Champagne will greet the guests as they arrive for a multicourse meal with cocktail pairings from the Hosteria Verde Supper Club. A presentation of select vintage-inspired gowns by Dawn Younger-Smith's Boudoir Queen and a musical performance from Chrysta Bell follow, along with poetry, DJs, and other treats. At 9pm, Younger-Smith presents a 1920s fashion show, Glam Dolls of Knightsbridge, with music from Murder My Sweet, featuring her husband Mark Younger-Smith (former sideman for Billy Idol and Charlie Sexton), my old friend Aaron Barrera (Abra Moore, Active Radio), and Chris Potter (Ministry), followed by an Electric Touch set, acrobatics, and more. www.secretcircus.net... On Valentine's Day eve, Sunday, Feb. 13, 5-8pm, Saengerrunde Hall hosts an entirely different kind of evening out as the divine Sara Hickman and jazz singer Mady Kaye present a swingin' Valentine's Ball featuring songs from the Great American Songbook and hits from the big band era. Ticket info can be found at www.madykaye.com.

CHERCHEZ LA FREAKIN' FASHION This Friday, Feb. 4, at 7pm, Mohawk presents Fashion Freakout! 4 featuring fashion from Prototype Vintage Design, New Bohemia, and Laced With Romance; hair and makeup by Avant Salon; and music by Gary Glitter cover band Leaders of the Gang. The show will be hosted by funnyman Matt Bearden. Tickets are $10 in advance through Transmission Entertainment and $12 at the door... And Tuesday, Feb. 8, is Cherchez La Femme from Coco Coquette and the crew that brought you Dangerous Women. This time, 12 more: 12 designers, 12 dancers, 12 twisted love themes hosted by Chris Lane (all the way from New Orleans) at the ND @ 501 Studios. Doors open at 8pm, $8. Both of these will sell out.