The War on Talking About the Drug War 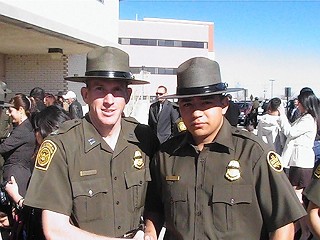 Bryan Gonzalez (r) at his graduation ceremony to become a U.S. Border Patrol agent – a job he lost after talking to a co-worker about the drug war (Courtesy of New Mexico ACLU)

In April 2009, El Paso native and rookie Border Patrol Agent Bryan Gonzalez was working a stretch of the Mexican border near Deming, N.M. It was a relatively slow day, so when Gonzalez saw fellow Agent Shawn Montoya patrolling in the same area, the two men took a break, pulled their vehicles up next to each other, rolled down their windows, and began talking. When the conversation turned to the drug-related violence that was plaguing the border, Gonzalez "mentioned that he thought that legalization of marijuana would save a lot of lives across the border and over here," New Mexico ACLU spokesman Micah McCoy said during a recent interview. Gonzalez also mentioned that there's an organization of law enforcement officers and officials – Law Enforce­ment Against Prohibition – that stands in opposition to the drug war. "The other guy didn't agree" with Gonzalez's views, McCoy said, but regardless, "it was a friendly conversation" between the two men.

The conversation ended, and that was that – or so Gonzalez thought. As it turned out, Montoya related the content of the conversation to a fellow officer stationed out of the Customs and Border Patrol El Paso Sector headquarters; in turn, that agent bypassed his supervisor and went straight up the food chain to the agency's Joint Intake Command in Washington, D.C., to report what Gonzalez had said that day. "From there, they started a full-blown Internal Affairs investigation," says McCoy.

Interestingly, Gonzalez, who was nearing the end of his two-year probationary agent period, wasn't aware that there was anything amiss until he was called to come to the El Paso HQ by his supervisor. When he got there, he was immediately placed under interrogation: "Do you have plans to overthrow the government?" the agents asked him. "They also asked if he was a socialist," McCoy said. Gonzalez was completely surprised and devastated, when not long after and just a month before his probationary period would have ended, he was handed a termination letter. According to the letter, Gonzalez was being fired because he held "personal views that were contrary to the core characteristics of Border Patrol agents, which are patriotism, dedication, and esprit de corps."

That, says Terry Nelson, a former Border Patrol agent who is now a member of and speaker for LEAP, is idiotic. For starters, the termination letter absolutely misstated the values of the agency, which are actually "vigilance, service to country, and integrity," says Nelson. And part of "service to country is the dedication to defend and uphold the Con­sti­tu­tion – and the last time I checked, the First Amendment was still the First Amendment to the Constitution." You "don't give that up just because you put on a badge," he said. Nelson should know: It was during his time serving as a Border Patrol agent, and then later, working with the government in South America, that Nelson decided the country's drug war was an utter failure. He spoke out about that from time to time, he said last week, and he was occasionally reprimanded, though not formally. "I got a finger in the chest: 'You don't make policy; you enforce it,'" he says he was told.

But there is no way that exercising your First Amendment right to free speech should get you terminated from a job – especially after the government has put so much money into your training. Gonzalez was an otherwise exemplary officer: While he was under investigation, he was actually named employee of the month, and he was regularly tapped to perform special duties reserved for high-performing agents, says McCoy. "By all accounts, he was an excellent agent and good at the job," he said. Indeed, Gonzalez, now 26, was looking forward to making a career out of his new job. Nelson says it's unfair that Gonzalez would be terminated for commenting privately that he believed there might be a better approach to drug policy than the one the U.S. has pursued for more than four decades. In short, the drug war isn't working, says Nelson, and it's ridiculous to pretend otherwise – and certainly foolish to fire someone for simply pointing that out. "He wasn't saying, 'I'm not going to enforce the law,'" Nelson points out.

Indeed, LEAP advocates for legalization, regulation, and control of the drug trade as the only means to reduce the harm associated with the drug trade and drug use. "Get it out in the open where we can control it; provide education and medical treatment when necessary," Nelson says. Gonzalez agrees. "I believe that the drug war just hasn't worked, and I think it's important for people to realize that it hasn't worked," he told Reuters last week.

On Jan. 20, Gonzalez, with the help of the New Mexico ACLU, filed a federal lawsuit in Texas against Customs and Border Patrol, alleging that his termination violated the First Amendment. Because Gonzalez was still a probationary agent at the time, he was unable to avail himself of civil service protections in order to contest his termination. Indeed, law enforcement agencies generally have wide latitude in firing probationary rookies.

Nonetheless, says the ACLU's McCoy, that doesn't mean an agency can "fire someone for discriminatory reasons" – and that is exactly what happened with Gonzalez, he said. Indeed, in a similar case, a LEAP speaker, Officer Jonathan Wender of the Mountlake Ter­race, Wash., police department, was terminated for speaking out in favor of legalization; he was ultimately reinstated and given back pay. McCoy says he believes the CBP's actions were so egregious and the violation of the First Amendment so obvious that Gonzalez, too, should be compensated for the loss of his job. Moreover, the lawsuit against the agency seeks punitive damages large enough to deter the agency from behaving the same way in the future.

In short, says Nelson, the country needs to start getting serious about the failure of its drug policy and stop trying to silence those who speak out. Indeed, responding to questions during his second YouTube town hall meeting last week, President Barack Obama said that while he doesn't favor legalization, the topic is "worth a serious debate." Appar­ently the CBP – or at least those responsible for Gonzalez's termination – doesn't agree. But that's exactly the conversation the country needs to have, Nelson says. "The only way we're going to 'win' [and keep people off drugs] is through education," he said. "We're not going to arrest our way out of the problem." 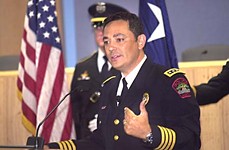 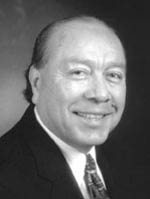