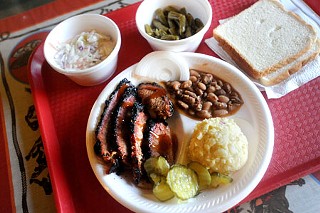 
Ray's Bar-B-Q blends so effortlessly into its environment that you might drive right by and miss it if you aren't careful. The shabby orange building looks as though the Montopolis neighborhood grew up around it, which it did; according to owner Natasha Williams, 45 years ago, when Montopolis was on the outskirts of town, the building housed one of Austin's first black-owned barbecue restaurants, and it has remained one ever since, now operated by the Williams family. The historic building may look familiar, however, if you watch the NBC show Friday Night Lights; it's been used as a filming location for the popular Texas-based series.

Right outside the front door, the cement doorsill is inscribed with the words "Ray's BBQ 2-15-99" – but when you step inside, it's immediately apparent that this has been a barbecue joint for much longer than that. There's an air of settled comfort in the cozy dining area; the walls are painted with a flat, smoky mustard color, the chairs and tables are sturdy, and there's a subtle Western theme that seems not so much a decor choice but more of an organic confirmation that you are in Texas right now. As you walk up to the counter, there's a chest cooler with an open Bible and two laminated menus on it.

The fare at Ray's is classic: barbecued meats and sides, available in sandwiches or plates, by the pound, or in value packs. One wall has shelves bearing chips, white bread, and buns, and a little table holds self-pour bins containing sweet tea, "unsweet" tea, and Kool-Aid.

"A lot of our business is our regulars," says manager Richard Sterling. "We get a lot of people, too, who land at the airport and want to find the closest place to get Texas barbecue." Many customers are workers grabbing a quick to-go sandwich, but there's a friendliness and ease to the interaction that causes most to sit down at a table with their sacks and eat here, joshing and conversing with the men behind the counter.

The mesquite- and oak-barbecued meats include brisket, Elgin hot sausage, Smokey Denmark sausage, chicken, and pork ribs, with occasional specials of baby back ribs and turkey legs. The sliced brisket is lean and tender, the sliced sausage hot and greaseless, and the pork ribs meaty. But it's the barbecue sauce that makes Ray's outstanding; on every table is a squeeze-bottle of the thin, orange, vinegary-sweet sauce that is the best accompaniment to smoked meats. It's more of an East Texas style of sauce and completely lacks the overpowering gloppiness that some barbecue purveyors use to hide the flavor of their meats. Instead, Ray's sauce brings out the flavor of the meat, and on the barbecue sandwiches especially, the sauce really comes into its own.

The barbecue sandwiches are served on either bread or a bun and wrapped in white paper (chopped beef, $3.75; combination, $4.95; pork rib, $4.95, available bones in or bones removed). The daily combo special ($4.95) includes a sliced beef, chopped beef, or sausage sandwich; a 16-ounce tea; and chips.

All of the sides at Ray's are made fresh daily. The cole slaw is a plain cabbage and mayonnaise recipe, but with a key difference: the cabbage is always fresh and crunchy. Ray Williams – Natasha's father, who does a lot of the cooking – achieves this by not salting the cabbage, leaving the salting to the customer. "When you salt it, it just goes limp and the cole slaw gets watery," he explains. "I don't much care for salt in my cooking. I use very little. The beans, the potato salad, all those things taste better if you add the salt at the very last, right before you eat it. I put my salt shakers on the tables!"

The potato salad is a plain cold potato, mayonnaise, and chopped pickle recipe, with just a touch of mustard. The pinto beans are slow-cooked and smoky, more tender than most. The barbecue plates (one meat, $6.50-7.95; two meats, $8.95; three meats, $9.95) come with two sides, plus bread. On Fridays Ray's serves a fried fish plate ($6.50) and fried fish sandwich ($3.99). The fish is catfish strips, and the sandwich comes on white bread with melted American cheese and tartar sauce.

The self-serve sweet tea is enough to bring me back to Ray's all on its own, but the desserts are compelling too. House-made banana pudding ($2.25), made with Nilla Wafers and fresh bananas, is always in the cooler, as is peach cobbler ($2.50). Other locally made treats are available at the register and usually include fresh chocolate cake ($1.95), mini pecan pies ($1.99), and chewy peanut butter crunch squares, made with cornflakes, sugar, peanut butter, and peanuts ($1.35).

All in all, eating at Ray's is experiencing Texas barbecue history; it just doesn't get more authentic than this.