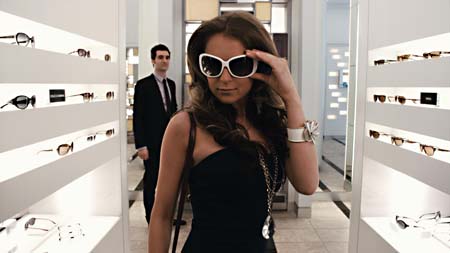 From Prada to Nada

Jane Austen's Sense and Sensibility gets de-anglicized in this inoffensive trifle that repurposes the Dashwood sisters for the current cultural climate. It's not nearly as ghastly a proposition as Pride and Prejudice and Zombies (nor as much fun), but Austen, whose oeuvre continues to entice filmmakers and authors nearly 200 years after her death, remains eminently fertile ground for modern retellings, mash-ups, and, of course, comedies of manners. Aimed, for all intents and purposes, at the Hispanic moviegoing public, From Prada to Nada follows the downward spiraling fortunes of a pair of upper-crust Los Angeles siblings, Nora (Belle) and Mary (Vega) Dominguez. When their wealthy father (Alexis Ayala) is unexpectedly felled by a heart attack and then turns out to have been virtually penniless at the time of his death, the pair are forced to abandon the lifestyle of the rich and Mexican-American and move in with their wise old Aunt Aurelia (Barraza) in East Los Angeles while they reconsider and recalibrate their fortunes – financial, romantic, and otherwise. Nora has the marginally easier task. A high-minded law student less interested in the frivolities of life (men, shopping, et al.), Nora quickly finds a position at a tony legal firm where she attracts the attention of Anglo attorney Edward (D'Agosto). Although both sisters are case studies in the denial, to varying degrees, of one's ethnic heritage, the previously Prada-mad Mary takes their financial downfall a bit harder, fretting about everything from class consciousness to gangbangers to high-carb Mexican food. She, too, however, finds her way out of the vacuous shopping mall and into the far more meaningful barrio via her newfound paramour, neighborhood handyman Bruno (Valderrama). Directorially, this is as light as a feather, and the occasional life lessons that litter the story (ethnic heritage is to be embraced, conspicuous consumption not so much; love is grand in any language, etc.) are somewhat less than revelatory. That said, former Spy Kid Vega is sweetly compelling as the bookish Nora and Barraza, an Oscar nominee for Babel, is relatively compelling in the sage old auntie role. There's little here that can't be conjured up any night of the week by turning on any number of Telemundo telenovelas, but while this is no Clueless, to be sure, it's also, thankfully, no Born in East L.A. 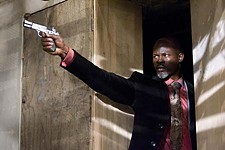 10,000 B.C.
After all those cataclysmic movies like Independence Day and The Day After Tomorrow, it seems right that Roland Emmerich has now turned his focus to the beginnings of civilization.