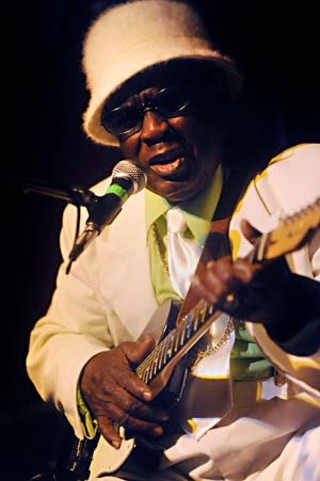 
No one in Austin teases out the blues as effortlessly – and authentically – as Hosea Hargrove. "Rock, roll, and blues" became the eightysomething bluesman's refrain, rattling inside a big, roomy Ruta Maya toward the witching hour last Friday night. Modestly resplendent in a white suit, white tie, and white fuzzy hat, set off against a lime green shirt and colorfully inlaid shoes, Hargrove offered not a great white cascade of notes, riffs, and runs, but rather a lesson in space and time. Big hands pinching the strings of his electric guitar, he strutted "Hoochie Coochie Man" while seated, his rhythm section sanding down the echoed emptiness of the venue. Fifty or so patrons began the set watching Hargrove's trio, but an hour later when the band gratefully unplugged, only half of them remained. The dearly departed missed something that put this city on the map and yet isn't advertised as coming from this local fountainhead. "Somethin' to put you in the mind of Hawaii," offered the guitarist – not surf, but tidal, an instrumental to get juices flowing. The tune's solo caressed like water dripping onto the same rock for millennia. B.B. King's "Rock Me Baby," closing cover of Hargrove's butter-pure 2010 album, Tex Golden Nugget, performed as advertised – "like my back ain't got no bone." Only a bluesman who's lived as long as this one can meter out such an unhurried pace. In "The Thrill Is Gone," the tightly coiled steel cables on the headliner's instrument struck a hum as honeyed as the buzz coursing through "I'm a King Bee" next, Hargrove announcing in his husky whisper, "I'm gonna sting you one more time." Find the hive and step on it. 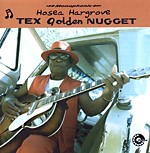