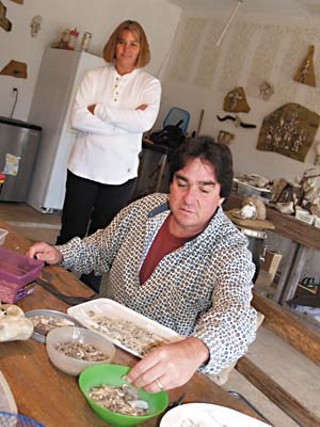 Growing up in Mexico, Moseley always enjoyed collecting rocks. He admits that he still has a lot to learn about the different types of rocks. But when he sees a stone, he visualizes what it could be, not what it is. He lets the color and texture of the stones decide where the picture will go. No two pieces are ever exactly alike.

When he turned 18 years old, Moseley moved to the U.S. First he lived in Hawaii, then California, and finally he moved to Johnson City, Texas, where he remodeled old houses and met his wife and business partner. Along the way he dabbled in photography and other arts. When he gave friends pieces of his rock art that he had made just for fun, they wanted to buy more.

Walking along the Pedernales River that runs outside his back door near Fredericksburg, Moseley has found stone tools and arrowheads left by Native Americans. The river that Lyndon B. Johnson called "Per-den-alice" means "flint" in Spanish. The chips left behind by flintknappers looked like flowing skirts or the body of a dachshund to Moseley.

About six years ago Moseley started selling his art at shows part time. A year later he went full-time and started showing in galleries around the state as well as at art shows. Last year he and his wife, Carol, attended about 17 art shows from Colorado to the Gulf Coast. "It's a lot of work for a few days," Moseley says, "but then it's like a vacation between shows." Whenever he is home, he is usually working in his garage studio.

At first, all of the stones came from the Pedernales River Valley. Now he has shifted to lighter slate, like that used for flooring, for the dramatic backgrounds. Most of the stones still come from his Hill Country ranch that has been in Carol's family for more than 100 years. He finds tiny round shells on a beach at Canyon Lake and other special stones from secret locations around the Southwest.

Working with tediously small pebbles to create faces, rock cabins, bicyclists, hikers, and cowboys seems like it could be tiresome, but Moseley says, "It's fun, and it relaxes me." He has a system where he sorts rock shapes into different baskets. Then when the inspiration hits him, he can easily find the piece he wants.

Look for Carlos Moseley's work at festivals around Texas this summer or contact him at www.riverrustic.com. His work can be seen at the Hotel Paisano in Marfa, Artisans at Rocky Hill in Fredericksburg, Copper Shade Tree in Round Top, New West Alley Gallery in Fort Worth, and Victor's Fine Arts in Houston.