It's good to have friends

What began with a simple question – "How can I use the title of Official State Musician of Texas to make a difference for children in Texas?" – has sprawled into a major project for musician Sara Hickman, one encompassing a 2-CD set, a concert at the Paramount Theatre, and a dream of raising a quarter-million dollars.

As Hickman tells it: "As both my parents were artists, I was blessed to grow up in a home surrounded by creative philosophies, tools, and supplies. I was encouraged to sing, to draw, to weave, to dance – to express myself anytime, in whatever fashion best suited my many muses.

"However, because of the slash in arts funding from our state Legislature, I knew thousands upon thousands of Texas children were being denied access and education on what art, music, theatre, dance, and writing can bring to their lives. So, I decided to create Best of Times, a CD featuring my songs re-created by an assortment of wonderful Texas talent. To my surprise, the project turned into a 38-track double disc, including performances from Willie Nelson, Marcia Ball, Shawn Colvin, a reunited Edie Brickell & New Bohemians, David Garza, Jimmy LaFave, the Flatlanders, Ruthie Foster, Robert Earl Keen, Patrice Pike, Gretchen Phillips [Two Nice Girls], AfterMath, BettySoo, Trish Murphy & Charlie Sexton ... and many, many more. After a year and a half of gathering songs, I am excited to present the CDs to the public, with all proceeds benefiting Theatre Action Project, a Central Texas nonprofit that returns the arts to schools, with the addition of not only sharing creativity with kids but empowering them to be problem-solvers by using art, theatre, and music to start dialogues and projects important to kids: bullying, self-esteem, self-discovery, dating violence, et cetera. Having worked in schools with TAP, I realized the power of what they bring to children, and I wanted to make sure TAP could continue its one-of-a-kind work.

"My dream is to raise $250,000 for TAP. No matter what, though, what I've learned over the last year and a half is that the Texas music community wants children to have access to arts education, and I'm incredibly grateful for every musician, engineer, and producer who helped to make my vision a reality. It's been an honor and a blessing to be State Musician, and I look forward to returning to the Legislature on Arts Day and sharing our story and asking them to reinstate arts funding so they can keep the ball rolling that I've simply pushed down the hill." 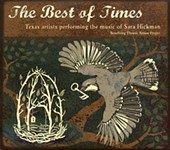