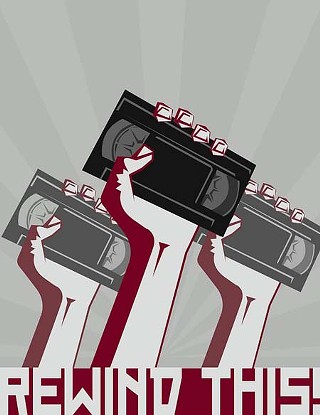 In the 1970s and '80s, many young movie enthusiasts equated the art of film with monsters, sci-fi, and over-the-top action movies. And while the video store popularity of movies like 'Gator Bait didn't land many such titles a running alongside Chinatown or The Godfather: Part II for Best Picture, it did guarantee them a soft spot in the hearts of a generation of VHS-renting filmgoers. So it's no surprise that the December 2008 announcement to stop the production of VHS tapes made local director Josh Johnson, now working on a documentary about the VHS format called Rewind This, a little wistful and a lot nervous about the ultimate resting place of some of his favorite childhood titles. After all, celebrated film archives don't generally tout their complete collection of Billy Dee Williams on three-quarter-inch tape.

Johnson admits that nostalgia contributes to his fondness for VHS, but says there's more to it than that. "My affection for VHS is that it was the predominate home-video format for many years, and thousands of titles never made the jump to other formats – and won't," says Johnson. But with VHS often missing from the lists of professional archives, private collectors in their mid-20s and 30s have contributed heavily to the VHS-archiving effort. This subculture of movie obsessives provided the inspiration for his documentary, which includes interviews with cinephiles like Tommy Swenson – co-creator of Viva VHS!, editor of Alamo Drafthouse preshows, and former employee of one of the country's largest video rental stores, Seattle's Scarecrow Video. "What digital formats have contributed to the world of film is a home-viewing experience more accurately presenting the film as it was originally conceived. What they've taken away, or neglected to preserve, is roughly half of the films ever released to the home-video market," says Swenson.

Since its conception, the film has expanded from documenting collectors to addressing VHS' impact on film consumption worldwide. The team hopes to travel abroad, including to Japan, where a popular direct-to-video market meant VHS had a potentially greater impact on home-viewing. But that kind of fact-finding trip carries a hefty price tag.

The film's cinematographer, Christopher Palmer, conceived of "Rewind This: The Art of VHS," a VHS-inspired art show, as a means to help fund such travel, while giving a nod to how VHS cover art affected video-rental culture. The show's opening at Rio Rita on Feb. 4 will include prints from Tim Doyle, paintings by Tim Kerr, and prints by Seattle-based artist Marc J. Palm, who also produced the flier for the Seattle stop of Zack Carlson and Bryan Connolly's Destroy All Movies!!!: The Complete Guide to Punks on Film book tour. (Five of those fliers, signed by Carlson and Connolly, will be available at the event.) The show's multimedia performance will feature Joseph Howington and Palmer's alter ego, DJ Topher. "I'll play vinyl and digital records while [Howington] mixes four simultaneous VCR decks using legacy video-mixer technology and two overlapped projectors," says Palmer. All proceeds go to covering production costs for the documentary.

"Rewind This: The Art of VHS" opens at Rio Rita (1308 E. Sixth) on Feb. 4, 7-10pm, and runs through February. For more information, visit www.rewindthismovie.com.