The World According to Voter ID

How to make your vote count if voter ID passes 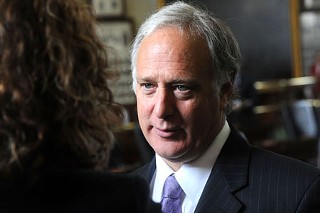 Kirk Watson's amendment would prevent voter ID from taking effect if its Republican backers aren't willing to fund it. (Photo by John Anderson)

As politically aware Texans well know by now, the Senate last week passed Senate Bill 14, which would create what may be the toughest voter ID law in the nation if it gets through the House – and with a quorum-proof 101 Republicans in that chamber, it almost certainly will. So we'll skip the blow by blow of the debate – see "LegeLand" for that – and we'll try to sum up just what this bill would do if its current incarnation passes.

First off, and most importantly, it would not prevent you from voting if you lack a photo ID when you arrive at the polling place. However, it might prevent your vote from being counted. Voters lacking ID can always cast a provisional ballot. The hard part – especially if you are ill, have mobility impairments, or live in a remote area – is getting back to the voter registrar within six days to prove your identity so that the provisional ballot gets tallied. Republic­ans tried to cover this with an amendment from Houston Sen. Dan Patrick that allowed those with a physician-certified disability to apply for an exemption. The elderly can also get an exemption, at least those who are elderly right now: Anyone who is 70 or older on Jan. 1, 2012, will be exempt. People who don't get old until after that had better get on the stick, though.

Other possible exceptions include those who are indigent and can't afford an ID and those who have a religious objection to being photographed, if they sign an affidavit swearing such. People can get IDs for free from the Department of Public Safety if they swear that they're obtaining them to vote, but that doesn't cover other parts of "can't afford," such as bus fare to get to the DPS office, hence the exception.

Those exceptions aside, SB 14 does what its supporters wanted: Unless you're willing to suffer the provisional ballot route, then simply showing up with your voter registration certificate won't be enough. You'll need one of these:

• A concealed handgun license (don't act surprised, you know this is Texas)

What will no longer be good enough:

• Other forms of photo ID, such as college ID

• An out-of-state driver's license or ID (you're a registered voter but just moved here? Tough luck.)

The big unanswered question, and perhaps the only hope left to kill it: How will the state pay for this? The DPS currently collects $15 every time it issues an ID card. That money presumably will dry up when everyone finds out they can get one for free just by saying they need it for voting – and it would come at a time when the DPS is struggling for money. A DPS witness at last week's hearings testified that there are 77 counties currently without a DPS license-making facility, and 65 of those are recent closures because the agency couldn't afford to replace license-making equipment. This in a year when the only budget question being asked by legislators is, "How much more can we cut?"

An amendment by Democratic Austin Sen. Kirk Watson, appealing to the penny-pinching nature of the other party, could end this charade of "protecting the integrity of the ballot." That amendment, now Section 25 of the bill sent to the House, states that if the Lege isn't willing to appropriate the money necessary to make this thing happen, then the law will not go into effect.