The U.S. Dept. of Energy visits Amarillo in search of friendly site for manufacturing nuclear warheads.

Battle of the Big Box

Enviros and Southwest neighbors find a common cause: fighting Wal-Mart and its plans for a Supercenter on the aquifer

The new map gives DeLay more R's, but perhaps fewer than he wanted.

The House Gives DeLay His Map

Competing scenarios fly through the community, and APD's staffing and procedures come under scrutiny

The Dept. of Homeland Security barely breaks a sweat investigating its own role in the May manhunt

Is Walgreens Too Big and Unfunky for South Austin?

Neighbors challenge the drugstore chain's plans for a store at Lamar and Bluebonnet Lane.

Glow Sticks: A Menace to Society!

The drug cops win one, lose one in the appellate courts.

Local T-shirt makers get an unexpected boost -- a lawsuit from their target.

A local coalition urges the city to take a stand against the PATRIOT Act.

Beneath the partisan rancor over re-redistricting boils a fight over minority rights.

A slow summer news week means we get to take some well-deserved potshots.

Bush loves war, but he doesn't want to equip the troops -- nor be one of them.

Japan Without the Pretense

Mimosa delivers more than it promises.

Virginia B. Wood has plenty o' news in this week's "Food-o-File."

Second Helpings: You Scream, I Scream, We All Scream, Part II

You scream, I scream, "Second Helpings" screams for ice cream!

Through the looking glass with Eisley

The Fresh Up Club

I Give You Canoe!

De-Loused in the Comatorium

Shut out by distribution companies, indie filmmakers go DIY when it comes to getting their movie out there.

The Dobie Plays host to Matthew Barney's five-part feast of the bizarre, the Cremaster cycle.

Hey, hey, it's a big-time world premiere right in our backyard.

A writer best known for goofball comedies, Ed Solomon tapped his darker side for his directorial debut.

Harry Knowles takes over British airwaves … and magazine ads … and the sides of busses … and pretty much anywhere else that those clever lads in the SkyTV marketing department can manage to fit him.

Despite its numeric designation, Part 3 is the concluding installment of Barney's art cycle. It fuses mysticism and modernism and was filmed in New York's Chrysler Building and Guggenheim Museum, among other places. Barney plays the apprentice who endures torture and travails while ascending each building.

The League of Extraordinary Gentlemen

Pirates of the Caribbean: The Curse of the Black Pearl 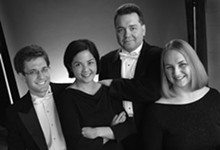 The Harrington String Quartet, which makes its third appearance with the Austin Chamber Music Center's annual summer festival in July, is based in Amarillo, and though that may not seem like a likely spot for a chamber music ensemble, the members of the Harrington Quartet feel quite at home on the range.

The Rude Mechs take Lipstick Traces to Europe, Austin Civic Wind Ensemble finds a new conductor, Mexic-Arte makes art for the bus station, and the city is looking for artists to mark up South Congress.

The Austin Shakespeare Festival's timely production of Julius Caesar, deftly directed by Paul Norton, features an effective, almost all-female ensemble whose depiction of the play's bold, rule-breaking politicians and opportunity-grabbing power brokers who send their enemies into disarray summons up parallels to the state of American politics.

Different Stages' modern-dress production of Shakespeare's Two Gentlemen of Verona isn't so hip as to be Two Dudes From Verona Beach, but its spirit of contemporary youth does show us how little young love has changed since Elizabethan times.
columns

Two words have been missing in all the hubbub about the Supreme Court's Lawrence v. Texas decision striking down laws against homosexual sodomy: Thank you.

What happens when the camera eye turns on the Style Avatar (a lot of primping and fussing and primadonna-ing, you think?), and whom did he honor with his presence on the Fourth? …