Fish in a Barrel: It's easy, but sometimes they deserve to die 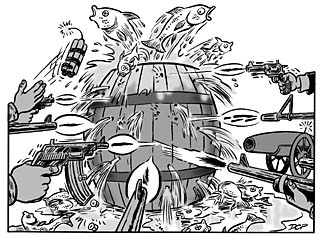 Summer's here, and the time is right for ... slapping some of the usual suspects upside the head. Too easy, you say? But sometimes, public offenses against common sense and decency are just wrong, no shades of gray, and important enough to consume our allotted portion of ink. Besides, ain't nothing else going on, at least at City Hall, which is still in dormancy pending the Wynn council's first meeting next week and the budget explosion at month's end. So read on.

The head troll of the Travis Co. Republican Party opined that, where re-re-districting is concerned, he'd be happy to see Travis split into eight districts if it meant getting rid of Lloyd Doggett. There's leadership for you! Which of those eight congressmen, pray tell, would go to bat on the U.S. House floor to get funding for the Travis GOP's highway fetish? Does Sager know anything about how politics works? I thought he was supposed to be smarter and more effective than his predecessor, Becky Motal. I guess that's why the Travis GOP is still batting zero in countywide races.

Okay, sure, Sager was exaggerating. I think. But splitting up Travis Co., and by extension Central Texas, is bad for Republicans and Democrats alike. Rep. Mike Krusee, R-Taylor -- the real leader of the regional GOP -- is right, I believe, that the map just passed by the House is actually better for Central Texas, because it doesn't so thoroughly balkanize our suburbs. Even better, of course, would be a neat split into two districts -- one for Doggett in the city, and one for John Carter, or Krusee, or whoever, that includes Williamson and Hays and western Travis Co. The numbers work fine. Though he is supposed to be a decent guy, the congressman who really needs to go away is Lamar Smith -- which would have also enabled a new Latino border district.

Two big stinking piles of recent Statesman opinion have stuck in my gizzard. First, the daily used the regional clean air plan as an occasion to bash Capital Metro. The transit authority is a key player (duh) in cleaning up the local skies, but it needs to do more to fix its problems, the daily sayeth. And what problems are those? Well, you know, a Cap Met bus driver got busted for sexual assault, which clearly means there are vast management problems at the agency. (Funny, they never say that about the Austin Police Dept.) And while Cap Met is now turning in a 90% on-time performance record, that's not good enough. They quoted a 19-year-old UT student who noted, in his expert opinion, that the bus system is not always reliable. Shame!

I have been arguing for years that Cap Metro, though imperfect, is no worse than any other public agency, and that its bad reputation has been cooked up almost entirely by the Statesman, because they know anti-bus rhetoric sells in the suburbs. In an honest society, the whores can advertise -- the daily should simply put on its masthead "We Don't Ride the Bus!" Saves time and trouble.

And next to it, they can emblazon "We Don't Like Austin City Hall!" Last week's effusion was titled "Progress lost in the process of being Austin," which says it all. You know, good jobs are being driven away because City Hall over-regulates and panders to central-city activists. What they really said -- if even they don't know it -- is that Austin gives power to its citizens, and that's bad.

The inspiration for this screed was a Sunday package about the jobless recovery, garnished with Central Texas tales of woe. Now, I think central city activists, as a species, have some familiarity with un- and under-employment, but that's a different matter. What went unmentioned by the Statesman is that none of its spotlighted victims had four-year degrees; they were factory workers in the tech ghetto with nontransferable skills who, during the boom, could make far more money than do our teachers, or cops, or City Council members. That's not to say they deserve to suffer, but I am puzzled at what City Hall has done to promote globalization, devalue education, and destroy the U.S. labor movement.

A reader writes to complain about my column two weeks ago on the Jessie Owens shooting, where I suggest that -- solely knowing what we know now -- it's hard to see how APD officer Scott Glasgow would avoid a manslaughter charge. Put yourself in the cop's shoes, he says. (I tried to. I concluded that I would hope to be a little more careful about using deadly force. You know, call me silly, but I expect cops to be careful.) And you know, our reader writes, I've never stolen a car. I guess that means he deserves to live.

African-American leaders jumped real quick on APD and local media for introducing the late Jessie (B.J.) Owens to the community as a criminal rather than a human being. I'm not sure if it's really a race thing -- it probably is -- but I too felt, when I saw the first APD press release about the shooting, that it might fall short of an outrage, because Owens was shot "trying to flee" and had a (truth be told, pretty minimal, but we don't yet know for sure) rap sheet. Black citizens know better. But as soon as the details started coming in, I joined the chorus of disgust.

See, gentle readers, as we know the story so far, there is no way Glasgow could have known anything about Owens' criminal history before he shot him -- there is nothing that suggests, let alone confirms, that APD could have ID'd Owens before he was dead. All the officer knew is that a black youth was driving a reportedly stolen car. We will never know what Owens did in that car on 17th and Tillery that may have cost him his life. But he didn't do anything before then that made his death justifiable. To suggest otherwise is obscene.

Normally, of course, the Chronicle gets slagged for being too nice to the cops and thus betraying the tenets of our tribe. We tend to empathize with cops on the street, whom we often see getting screwed by the top brass, which is a story the community doesn't hear anywhere else, which is what "alternative" (as in "alternative weekly") means. It's not Glasgow's fault that he didn't have a backup or a camera in his car, which might have saved Owens' life and would surely save the city anguish now. But let us not forget: The cops work for us. We have a right to review their performance.