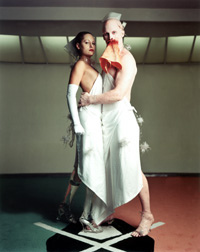 Never mind the bollocks, Matthew Barney transforms the shining spire of the Chrysler Building into the grandest sex pistol of all in this cinematic capstone to his five-part Cremaster cycle of filmed avant-garde artworks that he began some nine years ago with Cremaster 4. Shooting the series out of order is just one of Barney’s multifaceted directorial quirks; some of them, like his penchant for outrageous symbolic imagery, can be deeply affecting and memorable, while others, like this Cremaster 3’s ambitiously lengthy running time – it’s 182 minutes – seem tailor-made to induce headaches, snoozes, and abject confusion on the part of the general audience. This is art of a profoundly ambitious nature, and Barney’s excesses, of which there are many, have so far managed to skirt the critical disdain that might follow such willfully obscure iconography. His recent show at the Guggenheim was, by most accounts, a rousing success, and although the online world has seen its share of Barney-bashing, the artist has escaped with his reputation more or less unscathed. The mainstreamed transgressions of David Lynch come in for more abuse these days than Barney’s work, which either comments on the public’s growing acceptance of the bizarre as increasingly commonplace or reveals a newfound boredom with the mundane – either way the Cremaster cycle appears to be something of a bellwether. Cremaster 3’s storyline is an imposing and often willfully inaccessible thing, which is fitting since the series’ title is derived from the tiny muscle which controls the contractions of the testes during ejaculation, itself a pretty imposing and unfathomable biological nuance. That old bugaboo Freemasonry, with its mysterious levels of initiation and cryptic codices, is at the heart of Barney’s film. Sculptor Richard Serra is cast as Masonic architectural icon Hiram Abiff, with the Chrysler filling in for the Temple of Solomon, and Barney as the Masonic Entered Apprentice, whose constant sabotage of the Chrysler Building (he pollutes the elevator shafts with concrete) is David Cronenberg-esque body-mutation transplanted to a design aesthetic. Cremaster 3’s determinedly surreal imagery also recalls everyone from that previously mentioned Canadian director to Ken Russell, Peter Greenaway (especially the formalist nature of Barney and cinematographer Peter Strietmann’s compositions), and, in a scene guaranteed to put viewers off their next dozen dental appointments, Buñuel’s Andalusian eyeball. And then there’s Aimee Mullins, a celebrated professional sprinter and double amputee; Barney fetishizes her clear plastic prosthetics and cloaks her in a cheetah’s guise. What all this means is, like all art, open to interpretation, but Barney has gone on record and stated that the whole cycle is a metaphor for the artistic process, with liberal helpings of assorted creation/destruction myths. Certainly it’s all very apocalyptic. A demolition derby set inside a mock-up of the Chrysler Building’s gargantuan lobby brings to mind both Cronenberg’s Crash, itself a killer treatise on personal fetishizing, and the peculiar juxtaposition of low-brow pop entertainment in a high-brow art setting. Barney’s ultimate point is elusive, though. You might doze off from time to time, but what you see when you wake up has the potential to scar you for life. Drawing Restraint 9
Iconoclastic artist Matthew Barney and his paramour Björk flood the screen with arresting images and sounds, and though little of it makes ordinary sense, it's compelling nevertheless.