Japan Without the Pretense

Mimosa delivers more than it promises 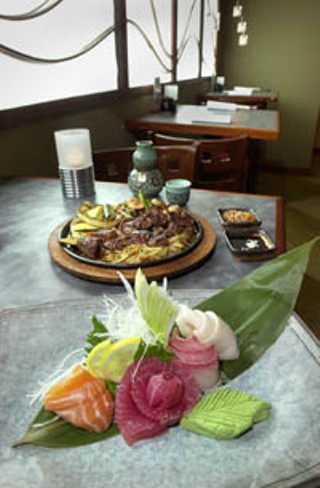 Japan is a world of ritual and precision. It is a world of elegance and grace, where every object is suffused with individual meaning, symbolism, and purpose ... or so it seems to most Americans. This is particularly true for those of us whose only experience with Japan is learned through America's Japanese restaurants. These rapidly proliferating temples to raw fish cleverly arranged on rectangular plates have set the trope for what we imagine Japan to be: clean, sophisticated, stylish, expensive. Not having been to Japan, I honestly don't have the background to make claims about the degree of accuracy of this image. However, I do have enough experience with culture to know that culture can be messy, even if it is Japanese. And so I was surprised and a little curious to recently discover a Japanese restaurant that doesn't quite fit American preconceptions of Japanese restaurants. And I was doubly surprised to find one that is simultaneously reasonably priced and good.

Located along the ever-mutable restaurant row on Barton Springs Road, I had passed by Mimosa without giving it much attention -- just another of the growing number of sushi bars to have been fertilized by Austin's swelling cosmopolitans. But this is not really a sushi restaurant; it's something more akin to a Japanese home-style restaurant, if such a thing exists. By this I mean that unlike so many of Austin's recently invented Japanese eateries, Mimosa seems unpretentious and rather comfortable. The space at Mimosa is neither overdesigned, nor the cuisine overbuilt. When the owners acquired the former Good Eats space (and most recently Henry's Cantina), they remodeled only minimally to make the restaurant recognizably Japanese. The space is homey and well furnished, with such simple effects as stained wood, rice paper-screened windows, and modern table lighting. A bamboo garden out one window and a courtyard garden flanking the other window suffuse the restaurant with light and greenery.

Mimosa's menu is comparatively diverse, featuring a litany of traditional Japanese foodstuffs paired with some new ones invented by the owner and head chef Dinh Tran (who is not, in fact, Japanese, but Vietnamese), from salads to sobas (noodles) to cooked seafood specialties. For starters, try their pan-fried gyoza ($4.95), well-cooked edamame ($3.50), or a plate piled high with feathery tempura made from shrimp, eggplant, onions, celery, carrots, peppers, and broccoli ($7.95). Other appetizers include tuna tataki, raw tuna marinated in a dainty sweet-sour sauce, and beef sashimi.

The restaurant's entrées include an assortment of meats and fish. All of them are served with miso soup and salad -- a little tidbit I cannot fail to mention. This is because Mimosa's house seaweed salad is one of the most delicious treats I have sampled in a long while. Neon-green strands of crunchy seaweed top shredded daikon and cucumbers. All this is marinated in a sweet rice wine and soy dressing, drizzled with spicy mayonnaise, then topped with toasted sesame seeds. Who knew seaweed could be so appetizing?

But there's more worth ballyhooing about than the house salad. For instance, Mimosa has engineered several new specialty nori rolls -- among them the Barton Springs roll and the spicy Arizona roll ($6.95). All of them are stuffed with fried seafood and spicy mayonnaise to appeal to Austin diners who are less than enthusiastic about the idea of raw fish. These crunchy little bites fall into an exciting middle ground between traditional nori and some other cuisine and represent cross-cultural pollination at work. Mimosa's more traditional sushi and sashimi can compare to some of the better Japanese tables around town. Their Sashimi Sampler ($14.50), featuring a changing assortment of fish (mine had tuna, salmon, yellowtail, and superb Alaskan cod) is fresh and ample. Or how about New York strip steak for only $12.50? The version I ate was cut into bite-sized cubes, marinated, and then pan-seared until the inside just turned pink. Tender and tasty, I was surprised that beef this good could be had anywhere for such a great price. Accompanied by a confetti of stir-fried vegetables, plus miso soup and a lettuce salad with carrot-ginger dressing, the sheer quantity of food with the meal seemed so uncharacteristically Japanese. Or rather it seemed less like an American Japanese restaurant and more like someone's grandmother's house.

I was, however, a little disappointed with the Tonkatsua, a panko-crusted, deep-fried pork cutlet. I have eaten this dish before and have loved the simplicity of the delicately spiced meat juxtaposed with the crispy panko crust. I found Mimosa's version to be adequate, but lacking a little in spice (it could have used more salt) and a little dry (perhaps a little less frying?). A pan-seared scallop lunch special (Donkabu, $12.95) also lacked a little salt, but the large, tender scallops more than compensated for minor salting flaws. Lightly coated with seasoning and flour and tossed with ginger teriyaki sauce, these delicate scallops practically floated off the plate. Saba Shioyaki (fried mackerel, $10.95) arrived on a simple iron hot plate. The fish was crisp and redolent with its own unadorned essence.

The waitstaff at Mimosa is earnest and friendly. The timing of the service was perfect on two occasions. Mimosa is one of those places that seems to deliver more than it promises. It is uncharacteristic, and it is unflashy; but it is good and relatively inexpensive. In a town quickly becoming saturated with Japanese art food, it is good to know that a more home-style version has a place.