A Short Stack of Nukes to Go: Pantex workers move bombs prior to disassembly -- the DOE proposes the facility begin manufacturing new weaponry. Containment structure is at rear.
(photo courtesy of Pantex Facility, Dept. of Energy)

Too much plutonium ain't enough.

It's not enough for the Bush administration, which contends the present weapons-grade stash -- enough for 24,000 nuclear warheads -- is turning to mush even as we speak. And it's not enough for the Panhandle's Big Mules, the business elite, who see only gold in the deadliest stuff on earth. On a pleasant evening in late June, the Mules are packed like, well, livestock, into a conference room at Amarillo College.

They are here for a U.S. Dept. of Energy-sponsored public hearing, and they are champing at the bit because the Bush administration seeks to loose more plutonium on the world. Plutonium-239, in the form of a hollow "pit" or core, is the essential ingredient of a nuclear bomb; it triggers the primary explosion in a multi-stage warhead. Elsewhere around the globe it may be known as the isotope most likely to bring death and destruction, but here on the High Plains it means jobs and dollars, development and deliverance. The region's largest employer is Pantex, the former final assembly plant and current resting place for America's nuclear arsenal. What was catastrophic for Nagasaki is bidness for Amarillo.

And bidness could soon be booming. The National Nuclear Security Administration, an aggressive, semiautonomous agency within the Dept. of Energy, has declared that the country can rely no longer on its massive but doddering stockpile of nuclear weapons. As the NNSA tells it, the plutonium pits reposing at Pantex may enjoy a protracted half-life of 24,000 years, but their usefulness as engines that power nuclear weapons is limited to 40 to 60 years. Some pits are approaching the big 4-0 -- the dowdiest in the stockpile were manufactured around 1970 -- and the NNSA says those may no longer be safe or reliable weapons of mass destruction. "Prudent risk management," said Jerry Freedman, the senior NNSA official at the public hearing, "necessitates designing and building a Modern Pit Facility" -- fedspeak for a nuclear bomb factory.

Critics say the pit facility is unnecessary. "There is currently no scientific basis for claiming that pit replacement is required for safety or reliability of the existing arsenal," said Arjun Makhijani, a nuclear engineer and president of the Institute for Energy and Environmental Research.

Despite such criticisms, the proposed Modern Pit Facility is kick-up-your-heels music to the Pentagon's plutonium cowboys, who have not mass-produced nukes since the FBI raided and shuttered the accident-plagued and contaminated Rocky Flats facility, near Denver, in 1989. "It's a supreme irony," says Len Ackland, author of Making a Real Killing, the definitive history of the Cold War plant, "that just as Rocky Flats is being 'cleaned up,' the government wants to build a new Rocky Flats somewhere else."

That somewhere could be Pantex. Or it could be one of four other atomic landmarks selected as finalists: Carlsbad, N.M., near the Waste Isolation Pilot Project; Los Alamos, N.M., where the bomb was born; the Nevada Test Site, 65 miles north of Las Vegas; or the Savannah River Site, in South Carolina, an early plutonium production and research facility.

The proposed bomb factory has its roots in a Dec. 2001 Dept. of Defense document, the "Nuclear Posture Review." Written in the wake of 9/11, the Pentagon-authored analysis urges fundamental changes in national security policy. It argues that the U.S. shift from its long-held policy of nuclear deterrence -- maintenance and certification of the stockpile without weapons-testing -- to a doctrine that considers launching pre-emptive strikes at "rogue states" -- those developing nuclear, chemical, or biological weapons.

"The need is clear for a revitalized nuclear weapons complex that will be able, if directed, to design, develop, manufacture, and certify new warheads in response to new national requirements," the Nuclear Posture Review declared, adding: "A new modern pit facility will be needed to deal with the large-scale replacement of components and new production."

The pit facility, budgeted at $2 billion to $4 billion for design and construction alone, is but one component of the Bush administration's master plan to overhaul nuclear America. The defense-spending bill Congress approved in May also includes research funding for "usable" nuclear weapons such as the Robust Nuclear Earth Penetrator, or "bunker-buster." This is no low-yield "mininuke"; it is at least six times more explosive than the bomb dropped on Hiroshima in 1945. "Use of these weapons would cross an extraordinarily dangerous threshold in terms of prompting other nations to want their own nuclear weapons," says Len Ackland. "It's a huge step backwards."

It also is a huge step toward violating the historic Nuclear Nonproliferation Treaty of 1970. As recently as May 2000, the U.S. repledged its "unequivocal" commitment to the disarmament treaty. Research and development of new weapons would also likely mark the end of a voluntary ban on nuclear testing; President Clinton imposed the moratorium in 1992. "People don't realize that we're getting back into the nuclear bomb business in a big way, and it's a very expensive business," Joseph Cirincione, director of the nonproliferation project at the Carnegie Endowment for International Peace told the San Francisco Chronicle in May.

About three hours and 15 minutes into the four-hour public hearing in Amarillo on whether and where the U.S. government should build the Modern Pit Facility, a middle-aged, stubble-faced man named John Doyle ambled to the podium to speak his three-minute piece. He had listened to nearly 70 speakers, mostly Big Mules or their minions, braying about the virtues of building bombs in their back yard.

Unlike the Mules, John Doyle wore not a tattooed grin and tailored suit, but a gray T-shirt, denim shorts, and tennis shoes. He avoided the florid tones of Les Simpson, the publisher of the Amarillo Globe-News, whose spigot of platitudes ("The spirit of the Panhandle shows itself in every aspect of life here"; "The people of the Panhandle get the job done and make sure it's done right") flowed ceaselessly. Neither did he swaddle himself in the flag, as did Gary Gibson, the president and CEO of the local utility. "My company and I support expanded work at Pantex not just because they're our customers or we'd like to see more jobs, but because we are Americans."

John Doyle spoke without written remarks, unlike State Rep. Warren Chisum (R-Pampa), the Lege's undisputed champion of nuclear waste, who read a love letter to Pantex from himself that sounded as if he were translating, on the fly, from some lost language.

Doyle had listened to these men and to many other supporters of building the plutonium pit factory at Pantex: the car dealer, the realtor, the banker, the builder, the HMO executive, the physician, the superintendent of schools, the Chamber of Commerce president, the manager of the radio station, the nuclear-engineering professor, the mayor, the county judge, two Pantex union officials, a retired Air Force officer, and on and on. Each of them, as well as Gov. Rick Perry and U.S. senators John Cornyn and Kay Bailey Hutchison (who had local pols recite their pro-Pantex letters) had apparently received the same talking-points memo: "Pantex enjoys tremendous bipartisan support"; "the Panhandle workforce is second to none"; "We already house the nation's nuclear-weapons stockpile -- safety dictates we build the Modern Pit Facility here." If John Doyle heard those points made once, he heard them 70 times.

By the time the DOE hearing officer summoned Doyle to the podium, many of the "Pantex Yes" folks (as an outdoor mobile billboard and their red-white-and-blue lapel stickers had it) had departed. TV Barbie and TV Ken had already done their live, 10pm stand-ups, sticking like lint to the Mules' talking points.

John Doyle was undaunted by the inattention. "I feel like I fell down the rabbit hole," he began. He spoke about the folly of building more weapons, about the message U.S. proliferation sends to other nations, about the money that could be going toward education and health care. "What does it say about us as a country that we have this sick Strangelovian obsession about our nuclear package?" 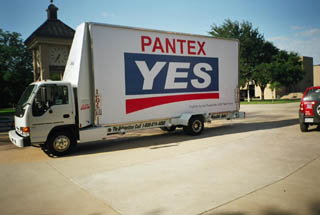 After his remarks, I cornered Doyle in the lobby outside the conference room. He told me he was born and raised in Claude, a farming community 30 miles southeast of Amarillo, and that he was a federal employee of 17 years standing.

Asked how he came by his views, he shrugged off the question. "We have 5,000 to 10,000 nukes, depending on where you get your information."

"Where do you get yours?" I asked him.

He said he was active in STAND -- Serious Texans Against Nuclear Dumping -- and that he reads The Nation. "I'm the only subscriber in Claude."

Doyle was neither the first nor the only voice of dissent. There were 15 others, all of whom also wore lapel stickers, in a variety of slogans and fluorescent colors. "Modern Pit Facility = WMD Proliferation Risks" read the one adorning Mavis Belisle. The director of the nonprofit Peace Farm established near the Pantex site, Belisle framed her argument not as Us (Pantex) vs. Them (the four other DOE sites under consideration) but in moral, economic, and health-and-safety terms.

"I'm utterly opposed to the Modern Pit Facility, not only at Pantex, but anywhere," Belisle said to a bit of applause, the first of the long evening. She laid out the risks associated with Pantex's proximity to the local airport and to the Ogalalla aquifer; she explained that data in the DOE's draft environmental impact statement suggest that the proposed plant would expose its workers to radiation sufficient to cause one fatal cancer every four years. And she reminded the crowd and the NNSA officials that under the terms of the National Environmental Policy Act, federal agencies are required to analyze alternatives to their proposed actions. Five of the alternatives are the sites DOE is considering. There is also a sixth, little-publicized alternative. "I urge you," Belisle said, turning to the NNSA official nearest the podium, "to take the no-action alternative." n

Editor's Note: The Peace Farm, founded in 1986, is located on 20 acres across U.S. 50 from the Pantex Plant. Formed to bring attention to the dangers of the nuclear arms race, and the environmental and safety risks of the Pantex Plant in particular, it seeks to serve as an ecological model for nonviolent change. From Aug. 1 to Aug. 3, the farm will host "Weapons Check," a weekend workshop on the weapons industry in the South, sponsored by Peace Action Texas, The Peace Farm, The Military Documentation Project, and co-sponsored by The Institute for Southern Studies. For more information, see www.iconmedia.org/mdp/weaponscheck.

In April 2004, the secretary of energy will announce whether the agency will proceed with the Modern Pit Facility, and if so, where. A copy of the draft environmental impact statement is available at www.mpfeis.com.

To make comments, which must be submitted by Aug. 5, contact:

or submit comments at www.mpfeis.com.