Hey, hey, it's a big-time world premiere right in our backyard. 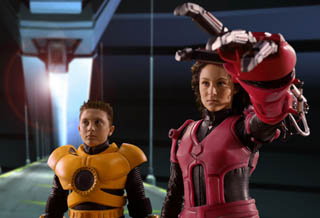 The July 25 wide release of the third (and, presumably, final) installment in the hugely popular Spy Kids franchise is fast upon us -- and even faster for Austinites with deep, deep pockets. Austin and the Paramount Theatre will play host to the world premiere of Spy Kids 3-D: Game Over -- that's right, kids, the world premiere -- on Sunday, July 13. Ticket holders will get a chance to rub elbows with writer/director Robert Rodriguez and stars Sylvester Stallone, Bill Paxton, Alexa Vega, and Daryl Sabara at the screening, the post-show banquet, and the Congress Avenue carnival. Of course, that kind of access doesn't come cheap, which is why a single adult seat will run you $1,000; a single adult with child, $750; and single child, $500. Miramax Films and Troublemaker Studios have pledged to donate the profits from 200 of the seats to local organizations, the Austin Film Society, and the Children's Advocacy Center.

To purchase tickets, contact the Austin Film Society at 322-0145.