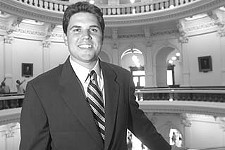 An Array of Votes

How Rose voted and whom he crossed

The remaining rural Democrats in the Legislature consider their options -- and fight back.

Mold Grows on House of Farmers

Ignorant Design at the SBOE

The National Council of La Raza looks to raise the U.S. Latino profile.

Too Many Cooks at Saltillo?

Garbage in, Garbage out -- in Court

The Council should remember the First Rule of Holes: When you're in one, stop digging.

Issues other than redistricting found space on the guv's special-session plate -- some were even important.

Your Pentagon PAL tracks your every move, and the FCC lets media companies redefine "local."

With all the right ingredients, has chef Robert McGrath found a trailblazing blend of the robust and bold? Virginia B. Wood finds out.

"Food-o-File" is on the Basil's case and other big restaurant changes.

"This small restaurant is tucked away in one of these nondescript strip malls in far Southwest Austin, on the way to Oak Hill," writes Claudia Alarcón. "Cleverly using their prescribed rectangular strip-mall portion, Cypress Grill is a comfortable space with a neighborhood bar atmosphere."
music 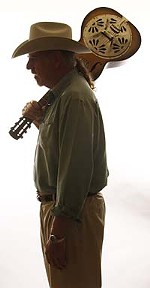 The Cult of Ray

Ray Benson steps out from behind the Wheel.

Austin from A to Z

Something to Crow About

Alive in the Nineties, Blind Eye Sees All
screens

Something old, something new

Dope Floats, AFS revamps its publication, and the Alamo Drafthouse keeps on getting cooler and cooler.

Strong words from Edward James Olmos, and what's on this week.

Warm Water Under a Red Bridge

In their charmingly bizarre manner, Shohei Imamura and his cast of quirky creatures remind us that a woman in heat is a beautiful thing.

Bay does it bigger and badder than ever.

Ozon’s film is like Eric Rohmer meets Brian DePalma – questions of identity and perception come to the fore, but slowly.
arts & culture

For seven years, Pro Arts Collective has consistently drawn an impressive and intriguing lineup of dancers, choreographers, and companies from across the nation for its annual African American Festival of Dance, and the 2003 edition continues that tradition.

It's the end of an era for the city of Austin's Art in Public Places Program as Martha Peters, administrator of the program for 11 of its 18 years, departs to direct a public art program in Fort Worth.

Since those wacky Canadians have legalized gay marriage, you know it's just a matter of time before Texas … wait, what are we thinking? Also, the "Truth" according to Babs …

Are organic fruits and vegetables worth the extra expense? When organic varieties are too pricey or out of season, is there any way to minimize the risks besides just rinsing and peeling?