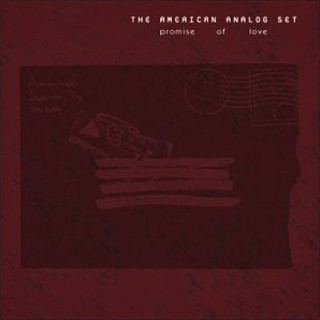 Minimalist think-rock has the tendency to fade into the background, something the American Analog Set has never been guilty of, and yet the locally based band fails to fully deliver on its Promise of Love. The precise popsters explore several muted ambient themes on their fifth full-length, at times dreamy and wistful ("You Own Me"), sprawling and burning slowly ("Continuous Hit Music"), and sweetly intense ("Promise of Love"). Promise never runs out of steam or succumbs to laziness, but it's never as engaging as it should be, either. Instead of promised love, the listener walks away basking only in slightly lukewarm esteem. More interesting is HOME: Volume V, a collaboration between the American Analog Set's NYC-relocated frontman Andrew Kenny and Ben Gibbard of Death Cab for Cutie. The nine songs here evoke the same vibe as a Nick Drake platter, poignant and whispery, sleepily intimate, every squeak of fingertip on guitar string pulling players into the room for a bedside serenade. In fact, HOME: Volume V would make the perfect soundtrack for a film montage of two indie lovers getting it on in soft focus. You can hear the disc's loveliest track, "Line of Best Fit," playing as the camera pans up from the jumble of ironic T-shirts and retro tennis shoes by the bed to the pair of skinny arms caressing one another. (The American Analog Set's CD release is Saturday, July 12, at the Mercury.)