For his directorial debut, screenwriter Ed Solomon made a dramatic change 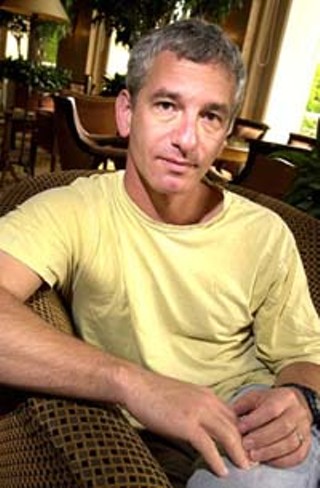 The first time I saw Ed Solomon, he was holding court at the Austin Film Festival, lobbing quips and charming the audience at an otherwise blah screenwriters panel. Solomon was forthright, handsome, and funny -- funny like you expect the guy who wrote Men in Black and Bill & Ted's Excellent Adventure to be funny. He was smart, too, and I scribbled down every word. Here is a quote from that day: "I don't know any creatives growing up who were popular. Unhappiness is a great prerequisite."

Ed Solomon was kidding. Kind of. But on a sunny Austin afternoon at the Four Seasons, in town to promote his directorial debut Levity, Solomon seems different from the man I saw working the crowd that day. He does not crack jokes. He is soft-spoken and careful with his words, so considerate he is almost gentle. When the waiter places a cup of coffee in front of him, Solomon pauses the interview. "Thank you," he tells the man. "Thank you very much."

"This is more my regular personality," he says, settling into an overstuffed armchair. "I'm not in front of an audience, for one thing." He crosses his legs and leans his chin on his hand, a classic therapist's pose. "Also, I'm tired."

He's tired because he's been running hard to promote Levity, a redemption tale that is a far cry from the goofball humor on which he built his career. Although it boasts a cast to write home about -- Billy Bob Thornton, Morgan Freeman, Holly Hunter, Kirsten Dunst -- the film is low-budget and contemplative, not your typical crowd-pleaser. As Solomon says, "It's not a movie that you can multitask during."

Billy Bob Thornton plays Manual Jordan, a quiet ex-convict who murdered a young drug-store clerk almost two decades ago. After his release, he takes up residence in a kind of halfway house run by Miles Evans (Morgan Freeman) and tracks down the sister of the man he killed (Holly Hunter), hoping to somehow make up for his grievous mistake. Solomon's script withholds a good deal -- like the winter snow that covers everything, characters keep their emotions beneath the surface -- and despite its title, there are few punch lines. The troubled main character rarely even cracks a smile. Levity is something he seeks, not something he has.

The idea for the story originated in college, when Solomon tutored in youth prisons. "There was a kid who had killed somebody, and he kept the photograph of the person he killed with him, and he was always staring at it. That was a haunting image to me. When I started writing the script, I hung out with some people who had committed murders, and I was moved by what they had in common." For one, they were all seeking some kind of redemption -- through the church, through speaking in schools, through the justice system -- but they also were plagued with the sense that their efforts, ultimately, were futile. "Nothing they did could make up for what they'd done. But they were compelled to go through the motions." Thus is the situation for Manual Jordan, a man so burdened by his past that he practically slumps under the weight of it.

It's a good role for Thornton, perhaps better known for roles of over-the-top mimicry like Sling Blade or A Simple Plan than for Monster's Ball or The Man Who Wasn't There, films in which he uses his deadpan to terrific effect. Manual Jordan, like those latter protagonists, is a passive man who isn't telling us much; Thornton's gift is to transmit all the emotions roiling in his pauses. Solomon first met the actor when he read for Leaving Normal, a 1992 road-trip movie starring Christine Lahti and Meg Tilly that Solomon wrote. "I thought he was amazing," Solomon says. "I really fought for him to be in the movie." This was before Billy Bob Thornton was "Billy Bob Thornton" -- you know, the tattooed and reckless romancer, the singing cowboy punkster, the antique-furniture-phobe -- back when he was just another out-of-work actor. Thornton didn't get the part, but he remembered what Solomon had done for him, and when he read Levity, he committed right away. On working with the notorious actor, Solomon says, "Billy's certainly eccentric, but I didn't find him difficult. He's got a really sharp ear and a strong intuitive understanding of what's right for him. He can be a very gentle spirit, but there's always the sense of the down-home Southern boy." The gentleness is something Thornton brings to Manual Jordan, a character whose goodness shines through the raggedy exterior, the past burnt up by mistake.

When Solomon says he sympathizes with Manual Jordan, it can seem incongruous. After all, this is the man who penned the famous Bill & Ted dialectic:

Q: If you guys are really us, what number are we thinking of?

But actually, it isn't. Solomon never wrote that line, and in fact, he hates it. The line was altered from its original (a sight gag Solomon still prefers) only to become the film's catch phrase. It's a small beef, but one of a thousand that any screenwriter carries around, and this brings us to the subject of turning director, of seizing the reins, of seeking that holy grail of moviemaking: artistic control. "I think I waited too long for a kind of 'permission' to do this," says Solomon of getting behind the camera. "But I've found that the only way to do it is simply just to start. Just declare yourself a director and begin. I thought that the experience of watching others would really help. But the truth is I learned more in the first 15 minutes of directing than I did in 10 years of standing on sets watching."

In that decade, Solomon clocked in as a script doctor in addition to the movies he developed from scratch. He has worked on successes, like Charlie's Angels, and failures, like What Planet Are You From? He has nipped and tucked films for which his name never appeared in the credits, and he would probably like to keep it that way. "Sometimes you're making a marked difference, and you feel like the film really is getting good," he says. "Sometimes it's kind of like rearranging the deck chairs on the Titanic." Recently, he scriptdoctored The In-Laws, a comedy of matrimonial anxiety starring Albert Brooks and Michael Douglas, opening in theatres May 23. "With that film, I was really like the guy who comes on in the seventh inning, pitches to two left-handed batters, and then goes back to the dugout." After a while, it all starts to blend together. At the Austin Film Festival-sponsored preview screening of Levity the night before, Solomon watched a string of trailers for his movies. "What I can't believe is how much of those films I don't remember. Some of them I've never even seen in a final form. Some I worked on for a few weeks; others I worked on for years."

Lately, Ed Solomon has been working on something a little closer to him. He has reteamed with Chris Matheson, the man he collaborated with on Bill & Ted's Excellent Adventure, to write a stop-motion-animated movie. "We've been laughing like crazy writing it," he says.

And that's good. Everyone could use a little levity.