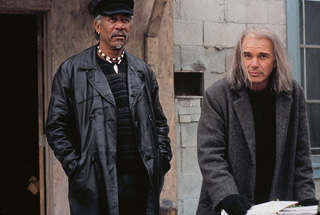 Levity – it’s an odd title for a movie whose salient characteristic is its lack of said quality. In fact, Levity would probably sink under the weight of its own gravity were it not for the spellbinding performances of the movie’s principal actors. They offer this movie the best of their skills, and indeed peck away at some of the movie’s core ideas about redemption and forgiveness, but in the end it’s not nearly enough to redeem the film. Levity stars Billy Bob Thornton as a murderer who is released from prison 23 years after the commission of his crime, although he is still haunted by his deed and carries with him a picture of his victim wherever he goes. He doesn’t believe in redemption, and he doesn’t believe in God – certainly not a god that might be willing to forgive his heinous act. Manuel is the name of Thornton’s character, and whether that’s a reference to the biblical Emmanuel or implies that the character is some kind of EveryManuel or that he is haunted by a name that reminds him of the very hands he used to smite someone’s life – you get the picture. This is a movie full of weighted meaning and none-too-subtle signposts. The laboriousness of its signals are just the start of this movie’s troubles, however. Levity exudes a sense of inauthenticity at every turn: from the unrumpled, unyellowed 23-year-old newspaper clipping of a photograph of Manuel’s victim to the fake-looking gray tresses that scrape Manuel’s collarbone and the unrealistic-seeming behaviors and set décors that populate the film. It’s as though writer-director Ed Solomon had nothing on his mind except the progress of his pilgrim, and all that accessory stuff be damned. In his first foray into directing, the highly successful screenwriter Solomon (Men in Black, Bill and Ted’s Excellent Adventure) got himself some of the best actors Hollywood has to offer and longtime Coen Brothers cinematographer Roger Deakins to film it and then seems to have checked out. The only authorial notes evident in Levity are its sadness, sloppiness, and earnestness. Manuel returns to the scene of his crime and happens onto a street preacher (Freeman) named Miles (no subtlety there), who runs a soup kitchen/afterschool program/ramshackle pulpit. Its delinquents look like extras left frozen in time from the sets of Asphalt Jungle or Sister Carrie. As the sister of the victim, Hunter is incredibly good, but her character’s reactions to the stranger Manuel (who doesn’t disclose his real identity to her) are unbelievable and forced. Levity relies on coincidence for the heft of its plot, a burden few movies can tolerate well. Like Manuel, Levity suffocates under its own good intentions and inexorable sense of doom.