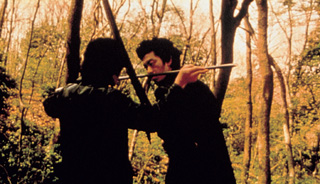 Gorehounds watching this low-budget Japanese splatterfest will think they’ve died (in a, no doubt, spectacularly bloody way) and gone to heaven, so breathtaking are the movie’s nonstop violence and hemorrhaging bodies. There is very little plot or dialogue involved in this yakuza zombie movie, but, honestly, shouldn’t the idea of yakuza zombies be enough to tantalize the senses? During the movie’s prologue we are told that there are 666 portals that connect Earth to the other side. Portal 444 resides in the Forest of Restoration somewhere in Japan. We first witness a scene of samurai-era men fighting with swords before the movie cuts to the present day. A prison escapee – Prisoner KSC2-303 (Sakaguchi) – and his partner race into the frame and await their pickup. Attached to his wrist is a handcuff with the severed hand of his guard still attached. Next comes a car full of yakuza, who have rudimentary names like Ponytail and Suit. They’re carrying with them a kidnapped woman dubbed Heroine. Before anyone can say as much as hello, they’re cussing and fighting like enemies who’ve behaved this way for centuries. And that’s more or less the story. Each time a body dies it comes back to life as a zombie, and then other warriors from other conflicts also jump into the fray. It goes on like this for two hours without let-up. The camerawork is mostly a series of delirious 360-degree pans that encircle the characters within its tight net. Much of the gore is wittily conceived and staged, and the actors all perform their parts with great gusto. But as the characters continually die and reincarnate, the scenario becomes far too redundant. The influences of filmmakers such as Sam Raimi and George Romero can be seen all over the place, and Versus should serve as a great calling card for its young director. It’s a knockout in the realm of low-budget horror filmmaking. By using the forest as the film’s sole set, the filmmakers saved money on sets and locations. You can be certain that all the money saved was poured into making more blood squibs. Two hours of watching nothing but decimations, decapitations, and disarray can make for a long couple of hours, though. A few dollops more of plot and characterization would only help maintain our focus and involvement. As is, Versus is a one-trick pony. 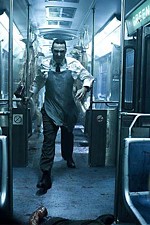 The Midnight Meat Train
This horror film, based on a Clive Barker short story, details the nightly exploits of a butcher who plies his trade nightly on human subway riders.