What happens when the camera eye turns on the Style Avatar (a lot of primping and fussing and primadonna-ing, you think?), and whom did he honor with his presence on the Fourth? … 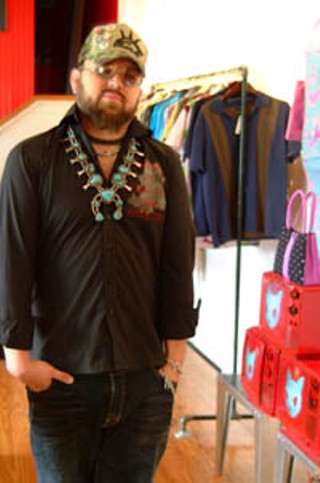 PRINT MODEL Now I know how Giselle feels when she's being sent to some exotic location on a modeling assignment for Vogue. I'd been chosen by Tribeza as one of three personalities they were covering in their "Exposed" section of their upcoming media issue. Why, after my recent Eddy Award for Civic Personality of the Year, I can see that my burning desire to climb the Mount Olympus of Austin society is paying off in spades. Phil told me they'd be photographing me, and I had visions of swarms of hairdressers, make-up people, editors, and photographers' assistants under the hot lights, but being of a certain age, I was nervous and offered simply to provide an excellent photograph for them. They declined. Of course, it's an understatement to say there is no way in which I bear any resemblance to Giselle, and mercifully I wouldn't be modeling swimwear. I knew I wanted clothes and accessories by Blackmail, and we agreed that sprawled on a divan in some soigné ensemble was just the right look. I suggested we shoot at Bella Home (1221 W. Sixth, 474-1157), since they'd have so much fun furniture to sprawl on, and we made a date. Upon arrival at Bella Home, I was ushered in by a dazzling redhead named Bradley Bechtol who gave me a tour, got me a Diet Coke, and made me comfortable. She confirmed that indeed we were shooting there that morning, but gently informed me that there would probably not be swarms of assistants and hot lights, probably just me and the photographer. While waiting for Tribeza art director Daniel Perlaky to arrive, I "scouted" various locations in the store. Bella Home has some absolutely stunning contemporary furniture. Listen, I'm a sucker when it comes to fabulous 18th-century furniture, but some of the most piss-elegant interiors are strictly modern, leaving the antiques in the past. A fresh rethinking of form and function can present a completely new and original point of view, and Bella Home was full of them. Proprietor Dante Bini (so handsome and effusive he could sell an Eskimo snow) made a gracious entrance with his charming mother and welcomed me. He apologized for the store looking so empty, and regaled me with a tale about how Bella Home had recently been broken into and robbed of $100,000 in fine Italian furniture. He showed me where the show window had been broken and the furniture carted out through it, causing serious damage to the pricey merchandise, scarring the finish, and ripping the fabrics. Dante described how the thief had no means to dispose of the furniture once he had stolen it, and stored it all in the back of a truck at the Public Storage facility across the alley from the store. Then the obviously amateur thief left a note at PS saying he'd be back the next day to pay for the storage of the items. Upon inspection, the folks at PS saw the furniture with its tags from Bella Home intact, notified Bella Home and the police were called. Needless to say, when the hapless moron arrived at PS to pay a storage fee, he was arrested. Perlaky arrived, sans entourage, and we got down to business with the photographs. Being in the public eye, I am not uncomfortable in front of the camera and do not pretend to be. I posed this way and that while he shot me, and in the blink of an eye, he knew he had what he wanted. He paid me a compliment (I think) by telling me I was the easiest subject he'd shot for "Exposed," since I was the one most at ease with projecting my public persona. I thought that sounded very flattering and look forward to the issue.

PARTY POOP Recently attended the Sex and the City party thrown by the dazzlingly talented Kat Jones of Milkshake Media. The cosmopolitans were flowing and beautiful shoes were abundant, especially the faux-Manolos on Dale Senglemann of Meringue Design. Other glitterati in attendance included Paula Fracasso (producer of Evan Smith's new interview show on KLRU), the lovely Trish Murphy, Liz Aston of the Nokona, lobbyist Margaret Shaw, and catering by Word of Mouth... Spent the Fourth of July at Bob Emerson's new home, high on the bluff overlooking Barton Springs. Bob, whom I think of as Babe Paley, seems to collect residences like I collect sunglasses. Co-hosts Stuart Seaver and David Banda ruled over a glamorous crowd including producer Charles Duggan, entertainer Taylor Trinity, philanthropist Gary Cooper, and my future NBF (Next Best Friend) the legendary Karen Kuykendall, among others too fabulous to mention.

PAINT IT BLACK Saturday, July 26, 8pm, Gail Chovan from Blackmail will present her Fall/Winter '03-'04 collection at an in-store show. Seats are reserved and tickets are free, but in short supply, so call 326-7670 to reserve yours now.