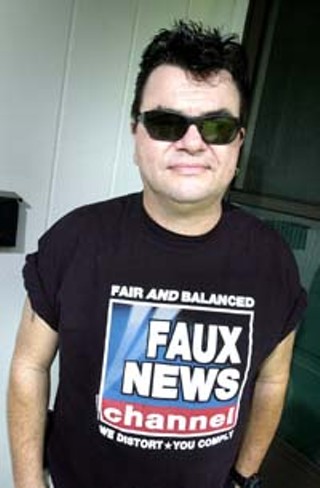 Common sense would have said to ignore it, and it would die a quiet death. But common sense, lawyers, and Fox News obviously don't mix.

At several anti-war protests this year, much ire was vented toward Fox News (aka the media wing of the Republican Party), spawning the "Faux News" T-shirts (see photo) that popped up, first here in Austin and then around the nation. The T-shirts parody both Fox News' logo and its laughable "We Report, You Decide" motto as "We Distort, You Comply." A companion T-shirt featured an Aryan boy wearing a Nazi Brown Shirt uniform with the motto "O'Reilly Youth," referring to Fox commentator Bill O'Reilly.

Fox found this none too funny, and last month sent a cease-and-desist order to the T-shirt's Austin creators, Richard Luckett, Brad First, and Rick Elms (doing business as Agitproperties). Fox's cease-and-desist letter not only accuses Agitproperties of copyright infringement, but also declares that the O'Reilly youth T "shows incredibly poor taste on your part, [and] is highly offensive."

"Fuck these guys -- I'm offensive?" said Luckett, a former merchandising manager for South by Southwest, Stevie Ray Vaughan, Duran Duran, and others. "This is the network responsible for reality shows like Temptation Island and Who Wants to Marry a Millionaire."

Predictably, sales have boomed. "Sales had been depressed lately, and then Fox sent the cease-and-desist letter." That led to press coverage, first by the British Register newspaper. "We went from 300 hits a day on our Web site [www.agitproperties.com] to 41,000 a day," Luckett says. "My Internet service provider shut me down [for using too much bandwidth], but we got our own server."

That was followed by more media coverage from Salon.com, Fox competitor MSNBC, and numerous other sources. "We're getting support from all over the world," says Luckett. "And orders ... I can't tell you how many we've sold, but it's been phenomenal. I go to the post office twice a day with huge shipments. The post office hates me."

But the American Civil Liberties Union doesn't -- the New York chapter of the ACLU is taking Agitproperties' case, no doubt armed with the extensive case law that protects parody. "We're going all the fucking way with this," Luckett says.