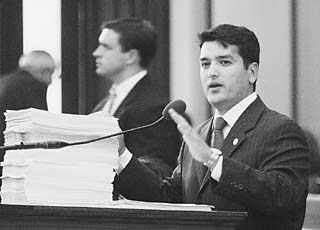 State Rep. Mike Villarreal, D-San Antonio, makes the case against the redistricting bill before the Texas House of Representatives on Monday. The taller stack of papers before Villareal contains witness statements presented to the House Redistricting Committee against redistricting; the shorter stack contains statements supporting the bill. In keeping with the theme of the session, House Republicans ignored public sentiment and pushed the bill through to the Senate. (Photo By Jana Birchum)

Quote of the Week: "We have shrimp. They eat shrimp. We have fish. They eat fish. We have petrochemical industries. They buy gasoline." -- State Rep. Craig Eiland, D-Galveston, mocking the "community of interest" between Galveston and Fort Bend counties, both paired into U.S. House Majority Leader Tom DeLay's district in the Texas House's redistricting map.

Wal-Mart and Walgreens aren't related, but they do have one thing in common -- bitter enemies among Austin neighborhood activists. See Battle of the Big Box for more on Wal-Mart's big box on the aquifer and Is Walgreens Too Big and Unfunky for South Austin? for Walgreens' big store on the south side.

The Austin City Council, now starring Mayor Will Wynn, comes back from its extended vacation next week -- the July 17 meeting will start the official Kill the Smoking Ordinance countdown. Watch this space next week.