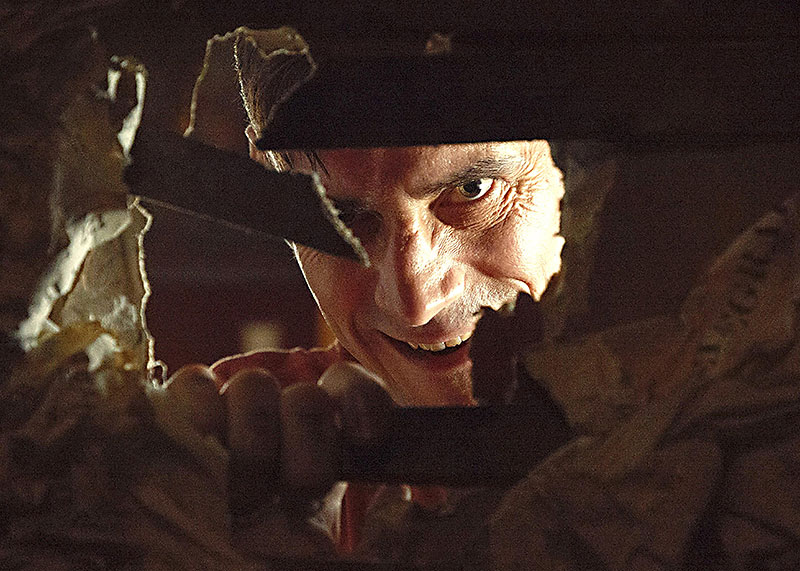 Every neighborhood has that house: the one with the stories and the history, the one everyone walks past a little faster. That's the house in Girl on the Third Floor – both onscreen and in real, chilling life.

The house that serves as the single location for the directorial debut of hip-and-cool indie producer Travis Stevens (Starry Eyes, We Are Still Here) isn't in just any neighborhood. Frankfort, Ill., is a leafy dormitory community in Chicago's commuter belt. It's the kind of community where a guy like Don Koch (Phil Brooks, aka former pro wrestler and MMA fighter CM Punk) would end up – if not wholly willingly. With a pregnant wife (Trieste Kelly Dunn) and a second chance after a career of sleazy business decisions, he's heading out to the burbs to fix up his new family home. But maybe the house doesn't want fixing up.

Ever hear the old saying that the three most important parts of property are location, location, location? Turns out that's true for filmmaking. Stevens explained that his producing partner Greg Newman had bought a house "as an investment, to fix up and flip, and in the process he heard the local stories about it being haunted." The beautiful four-story Victorian house at the corner of Sauk Trail and Center Road was rumored to have been a bordello, and a couple of murders were alleged to have left their psychic imprint there; previous residents had even claimed to see a small girl where no small girl should be. "[Newman] had a great idea: 'Before we fix up this house and sell it, why don't we bang out a haunted house movie?'"

That was in 2016, and so began the slow process of drafting scripts and working with writers. Then, in late 2017, the realities of real estate threatened to overtake the dreams of a film. Stevens said, "They'd been sitting on the house for so long that they were like, 'We just have to move on.' I just said, 'Fuck it, I'll just write it.'"

However, the house was already working its magic on the script. Stevens said, "When you're looking at a blank page, you've already filled in the blanks, because you've seen the house. You know what room connects to what room, you know what features there are that you can design scenes around, [and] then the history of the house fills in a couple more pieces." Plus, he said, "When you're in a place that has that mystical energy, it leads you in directions that you might not go if you just wrote this thing in a vacuum."

While Frankfort is a suburb, Chicago isn't just on the horizon here, but in the bones of Girl on the Third Floor. It's home to Queensbury Pictures, the new production company founded by Stevens, Newman, and former Metrodome Head of Acquisitions Giles Edwards. Back before Brooks started wrestling for WWE, he helped form a stable known as the Second City Saints, so proud is he of his Chi-Town roots. And Stevens managed to snag another son of the Windy City, legendary producer and musician Steve Albini, to create the score. "It's Chicago," said Stevens. "Not a lot of people are making movies there, and if you approach a local Chicago person and you say, 'Hey, I'm trying to do something that honors the vibe here,' and you can speak to them in an intelligent, non-Hollywood cliche way, then it happens easy. They say, 'Yeah, let's do it.'"

Stevens found that both Albini and Brooks were eager for new challenges – and in his first starring role, Brooks especially embraced the part. This definitely wasn't a vanity project, and two months before shooting, Stevens didn't even have a firm hold on exactly who Don was. He'd written the script with some latitude and had three different visions of his protagonist: "One was a very weaselly, good-looking, Jared Kushner type. One was a burly, bearded AJ Bowen type. And with Phil, it was, 'OK, we have this really handsome, charismatic man who is covered in tattoos. How do we work his backstory, and work his dialog, and work the way he engages with people [into the story so] that it doesn't feel like we're jamming a square peg into a round hole?'"

The worry was that audiences would not be able to see Don past their expectations of CM Punk. Stevens said, "Whenever you're casting someone who has more experience in another medium into a film, that's always a problem. 'We're going to put glasses on this 250-pound bodybuilder and call him a scientist. Wait, what kind of scientist is working out that much?'" However, in a town like modern Chicago, it's not hard to find successful business people covered in ink, and Stevens saw another athlete as a template for Brook's version of Don – soccer legend David Beckham. That allowed him to finesse the script in a way "that would acknowledge the look he's known for and integrate him into this world."

“For someone who’s reached such a level of success, he’s so pleasant and humble and there to enjoy the process.” – Travis Stevens on Girl on the Third Floor star Phil Brooks, aka wrestler CM Punk

The timing was perfect for Brooks: Shooting was scheduled to begin just after his second and final fight for UFC, Stevens said, "and afterwards [Brooks] was like, 'Well, I'm happy to look for new challenges.' We go, 'Well, here you go.'" Stevens found out quickly what many directors who have worked with big-name former wrestlers like the Rock and Dave Bautista know – that they're there to do the work. When Brooks came to set, Stevens said, "For someone who's reached such a level of success, he's so pleasant and humble and there to enjoy the process and do the best he can at whatever the challenge is."

But just because Chicagoans like Punk were happy to have the production, that didn't mean the house was going to be too pleased. The first time Stevens visited it by himself, he had the kind of creepy experience that horror filmmakers both dream about and dread. "I walked into the front room and tried to walk beyond the front room and literally felt, inside my chest, this huge sense pushing me back. Not like a physical thing, just this sense of dread pushing me back out of the room. I went, 'What the fuck is going on?' And I went outside, smoked a cigarette, went, 'OK, get over it, you're just tripping,' went back inside and tried to do it again. Whether I was tripping myself out or there was something there, literally the same thing happened again. OK, so how do I address this? So I hadn't even made it upstairs, and there's three floors. So I went, 'OK, I need to do this, and I need to make peace with this house, explain to the house what I'm trying to do with this movie and make sure it understands that I'm trying to honor any suffering that took place there.' So I made a tribute to the house that night, and nobody got hurt."

That said, everybody has a story or two about filming there – even Stevens after he had made peace with it. One day, he and the art department were looking at a closet door, trying to work out if they could repurpose it for another room or another shot. "All of a sudden," Stevens said, "the door pops open a little bit. It could be that the spring wasn't closed all the way or whatever, but there were so many stories where you go, 'Oh, that's weird.'"

Girl on the Third Floor